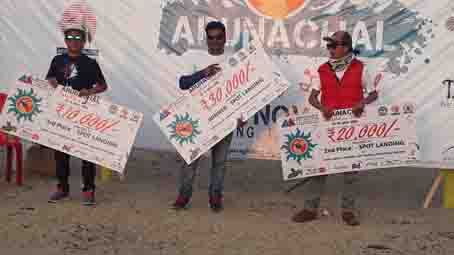 PAPU VALLEY, Nov 19: The three-day Arunachal Paragliding Festival organized by the Arunachal Paragliding Association (APA) with support from the youth affairs department concluded on a high note at Lumdung here in East Kameng district on Monday.
The event witnessed mass participation of pilots from various parts of the country and abroad.
Bir Billing from Himachal Pradesh emerged the winner in the spot landing competition, while Omraj Gurung and Deshvir Jimi from Nepal came second and third, respectively.
The pilots from Nepal, Indonesia, Canada, USA and Slovenia, and from other states of the country, shared their opinions regarding the potential of paragliding in Papu Valley.
Attending the valedictory function, Sports Authority of Arunachal Chairman Bamang Tago said the event would offer a solution to unemployment among the local youths in the long run.
“Such kind of adventure sports will fill the employment gap where younger generation can take this platform for sustainable livelihood,” he said.
Acknowledging the APA for successfully conducting the event, Tago assured to provide all possible help from his end to make the event even better in future.
APA president Vijay Sonam said the event has put Lumdung on the paragliding map of the world. He said the area, with its beautiful views, has the potential for the growth of paragliding.
Sonam said the APA would station at least two paragliding pilots in Lumdung, “so that they can facilitate whoever wants to glide in Pappu Valley.”
The APA in collaboration with the tourism department will be conducting a 10-day paragliding training programme for 28 local youths, including girls, from Tuesday at Lumdung.