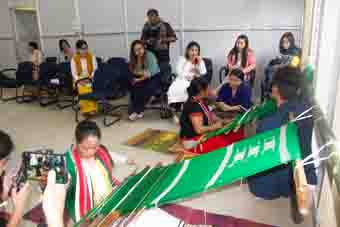 RONO HILLS, Nov 20: Addressing the valedictory event of the two-day dialogue on intangible heritage organised at Rajiv Gandhi University’s (RGU) Arunachal Institute of Tribal Studies (AITS) here on Tuesday, noted poet and author Mamang Dai said the culture of any community is in a complex process of evolution and there is bound to be cultural changes.
“We have to accept this fact and understand that culture cannot grow if it is frozen or mummified. What we need to do is understand this process and find ways of how we can retain a sense of continuity,” she said.
Participating in the discussion on the way forward for retention of indigenous culture, former vice chancellor of RGU and founder director of AITS, Prof Tamo Mibang, said several initiatives have been taken by both the university and the government with regard to the promotion of cultural practices but it was seen that there were not many takers.
“It is important that communities themselves come forward and engage with the university and the government for these initiatives to be successful,” he said.
Prof Sukrita Paul Kumar spoke about the need to include culture and folklores in the curriculum to make the younger generations more aware about their culture and identity.
She also suggested that a mentorship programme be initiated, with traditional practitioners as mentors, “which should include curriculum-based participatory learning.”
INTACH ICH Director Nerupama Modwel stressed on the need to create a network of community resources which could evolve into an “organic database.”
“The primary challenge is about how to get the youth interested in the discourse on cultural heritage,” she said, adding that promotion and creating awareness were keys to achieve this.
Expressing much satisfaction at the outcome of the deliberations, Modwel said the INTACH was “very keen to collaborate further with the AITS in taking forward the dialogue.”
Referring to the state cultural policy proposed to be formulated, she expressed hope that, since the AITS is expected to spearhead the process the outcomes of the dialogue would find a reflection in the policy.
Elaborating on the process of the event, AITS Director Prof Simon John said it was vital that the resource persons from the communities participated in it and offered inputs towards the recommendations to be formulated. He said the AITS would always offer its platform for more initiatives like this.
Recognizing that fault lines exist in the practice and continuity of the intangible cultural heritage of the tribes of Arunachal, the community participants in their deliberations called for tangible measures to be taken to bridge the generational disconnect that exists with regard to transmission of heritage.
For this, it was proposed that a centre for traditional knowledge systems and skills development be set up by the government to engage artisans and performers to impart training in various forms of folk expression. The centre would create academic content and offer various vocational courses on traditional arts and crafts.
Earlier in the day, the event witnessed interactive sessions with weavers, indigenous chiropractors and beads-and-accessory makers, along with a performance by a Galo cultural troupe.
During these sessions, which were moderated by Zilpha Modi and Drs Tarun Mene and Lienzang Zeite of the AITS, live demonstrations of weaving, indigenous chiropractice and bead-making were also presented.
The two-day colloquium concluded with the distribution of certificates to the community resource persons and a moving rendition of two of her poems by Prof Sukrita Paul, which acted as a perfect complement to the invocation chanting of a folk narrative by RGU Registrar Prof Tomo Riba at the inaugural event.