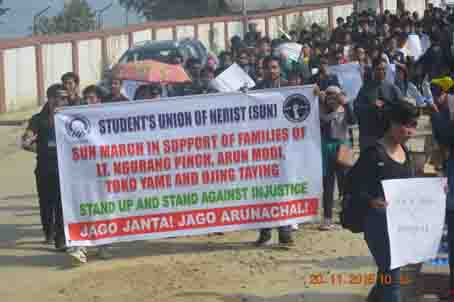 ITANAGAR, Nov 20: The families of four murder victims led a massive protest rally from the Akashdeep complex to IG Park here on Tuesday morning and demanded the resignation of Home Minister Kumar Waii for his “complete silence,” prevailing lawlessness, and rising cases of unresolved crimes in the state.
Expressing resentment against the home department and the state government for their failure to provide justice to the families, more than 30 student organisations of the state along with well-wishers joined the families of former MLA Ngurang Pinch, student leader Ojing Taying, and students Toko Yame and Arun Modi.
The families and organisations, as team ‘Arunachal Resists’, also submitted a memorandum to the state government, offering it 30 days (from 20 November) to conduct time-bound investigations into the four cases.
“Should there be any discrepancy, team Arunachal Resists, headed by the four families and the mentioned organizations, will resort to indefinite democratic movements, such as capital bandh, etc,” the families and the organisations said in their representation to Chief Minister Pema Khandu and Home Minister Kumar Waii.
Earlier, the families spoke about the cases individually, and claimed that talks of CBI inquiries were an “eyewash tactic” to placate them for the time being.
Pinch’s daughter, Ngurang Reena, said there has been no correspondence from the government’s side, and that a meeting with the CBI director revealed that there was no direction from the state’s personnel department to initiate an inquiry into her father’s case.
“The families are doing all the work which should have been done by the government,” she said.
Pinch was allegedly murdered on 18 November, 2017, during a rafting expedition from Poma to Ramghat with his friends.
Overcome with emotion, Toko Yame’s father, Koya Yame, said he has given up hope in the police and the government.
“The police have not prepared a charge sheet, the case files are lying in the magistrate’s court, and the authorities are handing out bail petitions to the suspects. The CBI and the SIT are eyewash. I cannot make an appeal to anyone anymore because nothing will come out of my pleas,” he said.
School student Yame went missing after a clash broke out between students of two schools in Tawang on 16 September, 2017. His semi-decomposed body was found on 24 September, 2017, near the Biga bridge waterfall.
Ojing Taying’s father, Jiten Taying, and Arun Modi’s uncle, Kaptik Modi, also said their cases have come to a standstill.
They highlighted that the absence of a forensic lab in the state and the subsequent delay in carrying out tests and investigation are giving more time to perpetrators. They called for collaborated efforts from more families, so that murder cases are not neglected.
Ojing was brutally attacked by unidentified youths in Itanagar on 10 June, 2017. He succumbed to his injuries on 19 June, 2017, in a Guwahati hospital.
Arun was missing since 13 September, 2018, in Tezu. His body was found in an abandoned water tank on 16 September, 2018, near the botanical garden there.
Expressing similar sentiments, the families of Tumbom Bogo Yaying (murdered on 25 January, 2017), Mikrik Lomi Karga (murdered on 30 July, 2017) and Yiter Pale (murdered on 2 May, 2018) also participated in the rally and condemned the lacunae in the security system of the state.
Some of the supporting organisations include the Rajiv Gandhi University Students’ Union, the All Arunachal Pradesh Students’ Union, and the North East Students’ Organisation, besides several college and district student unions of the state.