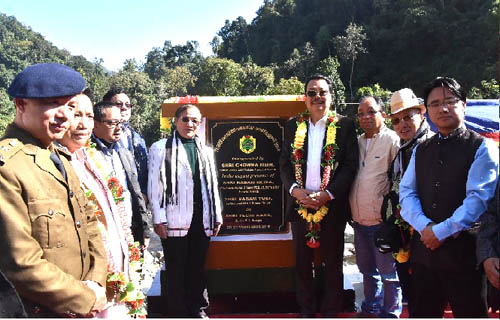 MENGIO, Nov 23: The state government has prioritized connectivity to the remote and interior places for all-round development of the state, Deputy Chief Minister Chowna Mein said after inaugurating the steel girder bridge over the Panior river on the Sagalee-Sakiang road in Mengio circle of Papum Pare district on Friday.
“The government is committed to developing all the interior areas of the state, and it is through such developmental works that we can arrest the migration of people from the villages to the towns and cities,” Mein said.
“Real development will be achieved when we connect the interior areas,” he added.
The DCM informed that rural roads worth Rs 2000 crore would be constructed across the state under the PMGSY, adding that upgrading and maintenance of the rural roads would also be taken up by the government.
“The Frontier Highway project, which is in the pipeline, will further connect the interior border villages,” Mein said.
He also said the proposed Industrial Corridor along the foothills from Bhalukpong to Kanubari would accelerate economic activities in the state.
Lauding the contractor, Tarh Kena, for completing the steel girder bridge on time, Mein said the government would encourage such committed local contractors to come up.
Responding to a four-point memorandum submitted by former chief minister Nabam Tuki, who is also the local MLA, Mein assured to take up with the DoNER ministry the proposal for construction of a road from Marung to Gika to Panior bridge point via Sarch Gai, Mate, Kusu and Pan under the North East Special Infrastructure Development Scheme.
He also said he would look into the request for construction of a steel bridge over the Panior river to connect Bong village; construction of a slope stability structure to protect the road formation near the steel girder bridge; and construction of a steel bridge over the Nyorpung river to connect Paga village in the next financial year.
Tuki in his address said Mengio is one of the most interior administrative headquarters of Papum Pare, and that such developmental works would bring economic benefit to the people of the remote areas.
Earlier, Sagalee PWD SE G Padu informed that the 75-metre bridge was constructed under the RIDF/NABARD at an estimate cost of Rs 600 lakhs.
The DCM also laid the foundation stone for the Rs 19 crore PMGSY road from Sakiang to Nargang, which will connect seven villages when completed. Earlier, he inaugurated the customer service point in the premises of the EAC office here.
Among others, Itanagar MLA Techi Kaso, PWD Commissioner Bilatee Pertin, PWD (WZ) Chief Engineer K Waghe, Papum Pare DC Dr Joram Beda, and SP Tumme Amo were present on the occasion. (PRO, DCM)