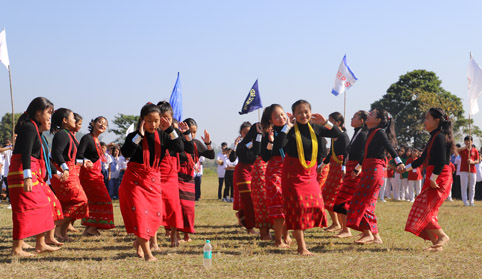 ITANAGAR, Nov 23: The 10th AAPSA-Sahodaya Talent Search was inaugurated here on Friday amid a huge gathering of students, teachers and heads of educational institutions by Education Secretary Madhu Rani Teotia.
In her address to the 1500 strong gathering, Teotia congratulated the All Arunachal Private Schools’ Association (AAPSA) for contributing to the wellbeing of education in the state for the past 10 years and said “the government is looking up to the AAPSA to continue to make milestones of achievements in the field of education and human development.”
She also commended the students of Himalayan University’s social work department and the staff of Childline, Itanagar, who prepared a promotional dance performed by kids from the Don Bosco Literacy Centre.
“Everyone needs to be aware of the 1098 facility and use it for the welfare of children in distress,” Teotia said.
ITBP DIG (Operations & Training) Sanjeev Kumar Singh exhorted the students to identify and make use of their talents.
“Talents are everywhere. You only need to identify and exploit them,” he said.
Singh also spoke about the civic action programmes and the border area development programmes that the ITBP is initiating in Arunachal Pradesh, and called upon the youths to benefit from the activities.
APP AIGP Kime Aya spoke of the role that private schools play in the lives of young people and said “the influence that private schools make in education is unparalleled.”
Aya exhorted the students to be “always on the road to perfection,” and called upon the young people present to be in touch with the Association of Past Pupils of Don Bosco, which he said is trying to contribute to youth welfare activities.
Earlier, AAPSA president Techi James spoke about the efforts that the association is making to “reach out to students, teachers and parents in the mission of education.”
AAPSA secretary Levi E Katy, who is also the principal of the host school, Donyi Polo Vidya Bhawan (DPVB), expressed great happiness at being a part of the AAPSA and the chance the DPVB got in hosting an event of such magnitude four times in a row.
He thanked former CM Gegong Apang “for establishing such an institution of excellence,” and Money Apang, the present DPVB chairperson, “for showing willingness to host the event.”