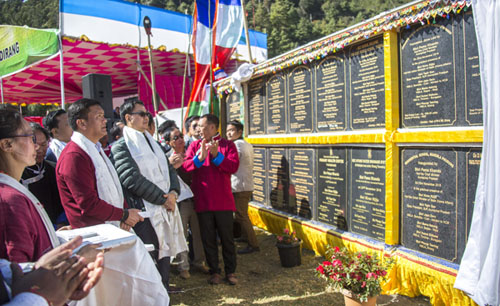 DIRANG, Nov 23: “Arunachal has walked enough on the wrong path, and the present Team Arunachal government is determined to set the course right,” Chief Minister Pema Khandu said.
The CM said this during a developmental meeting after inaugurating as many as 29 projects here in West Kameng district, in the presence of MoS for Home Kiren Rijiju, state BJP president Tapir Gao and others, on Friday.
Describing the inauguration of 29 projects as “a sign of progress,” Pema commended the “impressive teamwork” of the public leaders and government officers.
“The Team Arunachal government appreciates quality work and will not tolerate any form of corruption,” the CM said.
He said the Sarkar Aapke Dwar scheme launched by the state government was having a positive effect on the government officers, and informed that the state government is drafting “a film policy and a tourism policy.”
The CM also said private sector players are investing “on an unprecedented scale” in the state’s tourism sector.
Rijiju, Gao, Advisor to CM Japu Deru and MLAs Kumsi Sidisow, Mama Natung and Phurpa Tsering also spoke.
The inaugurated projects include an RCC hostel building for boys and girls of the government higher secondary school here; improvement of the 12 km Sangti-Khasso road; a steel truss bridge over the Shashirong river; a government polytechnic college; an RCC school building for the
government middle school in Thembang; the 20 km BRTF road to Broksarthang via Lubrang (Stage 4); the 13 km Namsu-Cher road (Stage 1); the 4.73 km Dirang village-Morshing road to Showda (Stage 2); the primary health centre in Thembang; and an RCC storm water drainage system at Nadipahar area in Dirang township.
The chief minister also inaugurated the working and unemployed women’s hostel for Dirang; a project to improve the road network in Dirang; an EWS housing project in Dirang under the RAY; a residential school for Mandala Phudung; residential schools in Rama Camp and Thembang; and a vendor market in Dirang.
He also laid the foundation stone for projects including the office of the power department’s transmission division 1 executive engineer (E) in Dirang; augmentation of water supply to Dirang; providing water supply in Chug, Namsher, Nishithang, Barchu and Donglok; and construction of a 33 kv express line from Dirang to Jang.
Rijiju inaugurated the upgrading of the government middle school in Rama Camp to the secondary level; improvement of the road from 9 Mile point of the Bomdila-Tawang road to the Salari-Nafra road (Phase 1); and upgrading of the government middle school in Dirang village to the secondary level.
He also laid the foundation stone for a tourist lodge for Sangti and Khasso; a CHC building (Block B) in Dirang; a PHE&WS division office in Dirang; a water supply project for old Dirang; and renovation, modernization and improvement of the T&D system i/c sub-station of Bhalukpong, Kalaktang, Dirang and their adjacent areas.
The CM also visited the fortified Thembang village which has been declared a world heritage site by the UNESCO. (CMO)