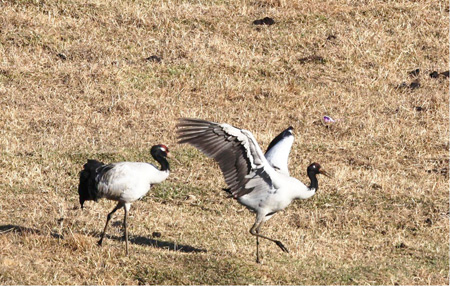 In the Northern Hemisphere, winter is knocking at the door. In the higher latitudes the temperature is dipping, and most of the animal habitats will be covered with snow. Hence, during winter, there will be a temporary scarcity of food and habitat for many animals which are not specialists at living in snow-covered habitats.
In order to avoid harsh environments, many animals migrate to the lower latitudes. Likewise, the black-necked cranes also migrate and winter in southern China, India and Bhutan. Also, black-necked cranes from Tibet province regularly winter in Chug valley, Sangti valley and Zemithang; but they did not come last winter, and this year also they have almost overshot their arrival period.
Delayed arrival is possible. But the big question is: will the black-necked crane winter again?
The black-necked crane (Grus nigricollis) is an important migratory crane species among the 15 species of cranes in the world. It is an exclusively high altitude crane that is normally found to breed in high altitude wetlands ranging from 3000-5000 mtrs, and it winters at an altitude of 1500-3900 mtrs above sea level.
The black-necked crane’s preferred habitats are high altitude wetlands like lakes, lakeshore meadows, swampy marshes, swampy meadows, rivers, reservoirs, etc, where herbaceous plants are in abundance. They are also often found on farmlands. The crane has an omnivorous food habit as it usually consumes plant seeds, fruits, tubers, shoots, leaves, small rodents, frogs, and invertebrates like earthworm, crabs etc, and is also often found to consume agriculture produce like peas, peanuts, potatoes, turnips, carrots, radish, barley, oats, rice, maize, bajra, etc.
The 1.39 metre tall and 5-6 kg black-necked crane has a whitish plumage all over its body, but its primaries and secondaries are blackish, and the black plumage can be seen over its neck and tail, with a red crown on its head.
According to the International Union for Conservation of Nature (IUCN), though the black-necked crane is a protected bird in its distribution range of Bhutan, China and India, its overall population across the globe is gradually declining. As per Birdlife International, in 2018, the black-necked crane’s global population is estimated to be around 8,000-11,000 individuals only. Therefore it is listed under the vulnerable category in the IUCN’s Red List of Threatened Species.
Though historically it was found in many places, currently the black-necked crane is distributed across only three Asian countries – China, India and Bhutan. It is reported from Xinjang, Tibet, Qinghai, Gansu, Sichuan, Yunnan and Guizhou provinces in China; Wangdue, Bumthang and Trashiyangtse provinces in Bhutan; and Jammu & Kashmir and Arunachal Pradesh states in India. The black-necked cranes in Xinjang, Tibet, Qinghai and Sichuan in China and Jammu & Kashmir in India are both breeding and wintering populations, but the black-necked crane in Yunnan and Guizhou in China, Wangdue, Bumthang and Trashiyangtse in Bhutan and Arunachal Pradesh in India are a wintering population only.
In Arunachal Pradesh, the wintering of the black-necked crane was first recorded in the Apatani valley by FN Betts in 1946. He recorded 27 individuals – a number which remained constant and regularly wintered in the Apatani valley till 1979.
As per L Kaecher’s report in 1981, due to encroachment of habitat and hunting by the locals, the black-necked crane either abandoned the Apatani valley or became extinct sometime in 1979. After that, the black-necked crane was rediscovered at Sangti valley in 1990, then in Zemithang and Chug valley in 2010 and 2016, respectively.
Since then, the black-necked cranes winter regularly at these three sites. Every winter, the black-necked cranes arrive in late October or early November, and depart in late March or early April. Till 2018, a maximum of 6, 11 and 5 individuals were recorded from Zemithang, Sangti valley and Chug valley, respectively, and the total winter population reached a maximum of 16 individuals in the winter of 2016-’17. Unfortunately, in the succeeding winter, ie, last year, the black-necked cranes did not arrive at the three winter sites.
Earlier, cases of their not arriving simultaneously at all the winter sites were not known; it happened for the first time in the black-necked crane’s wintering history. Again, November is almost over, but the black-necked cranes have not arrived at any of the winter sites.
It is a worrisome situation. Will the story of the Apatani valley repeat, or will the black-necked cranes winter again in Sangti valley, Zemithang and Chug valley? Let’s hope and pray for a delayed arrival of the winged winter guest. (The writer is Assistant Professor, Ecology & Wildlife Biology, Department of Zoology, Rajiv Gandhi University)