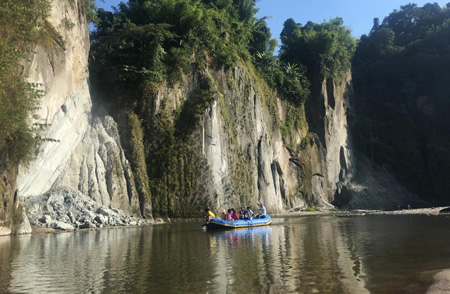 Staff Reporter
KANEBUNG, Nov 29: The second day of the Papum Poma River Festival (PPRF)-2018 began with a host of adventure activities for visitors.
Explaining on the day’s activities, festival director John Panye said that there are several activities for day-time visitors, such as water zorbing, kayaking, boat rides, trekking, zip-lining, hot-air balloon ride, volleyball and traditional archery.
There is also a line-up of artists to perform during the evenings till the last day of the festival.
He also informed that a few regular rafters from the neighbouring state had arrived at the site from upstream.
“Many rafters come from other states to camp on the banks of the rivers. They don’t stay at hotels or resorts, and simply indulge in some angling or camp on the riverbanks.
The locals can not only give back to nature by releasing fingerlings to increase productivity of fishes, but also monetize by charging a nominal fee to passing visitors who wish to engage in angling,” he said.
Panye also said that since this is the first edition of the festival, the committee has decided not to charge any entry fee. However, parking charges will apply, he added.
“We want people of the capital and nearby areas to witness the potential of Sangdupota circle as a tourist hotspot before we decide to start monetizing from the event,” he said.