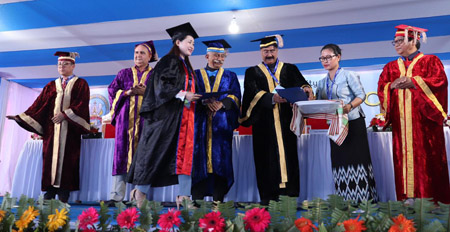 Society, where girls excel in academics is certainly on the path of progress: Governor

RONO HILLS/DOIMUKH, Nov 30: “The society where girls excel in academics is certainly on the path of progress,” said Arunachal Pradesh Governor, B.D. Mishra while addressing the graduates of Rajiv Gandhi University during the XVIth Convocation of Rajiv Gandhi University in the university campus here on Friday.
The Governor was impressed by the high number of girl students amongst the Ph.D degree awardees and gold medalists. A total of 5867 students were conferred degrees of various courses. Among these were 44 in Ph.D, 29 in M.Phil, 1398 in PG and 4396 in undergraduate courses including 51 Gold medals (25 in PG 23 in UG Programs), 1 Chancellor’s Gold medal and 2 Vice Chancellor’s Gold medals which were awarded in the respective courses for performing best among the first class division.
Further, Biswadeep Doley, M. Sc in Zoology was conferred the Chancellor’s Gold medal for being the topper amongst the postgraduate students, while Marina Ezing and Libi Nyodu, B.A in Education were jointly given Vice-Chancellor’s gold medal for being the toppers at the undergraduate level.
Congratulating the graduating students, the Governor further urged upon them to contribute towards nation building. He said that the society has enabled them to pursue and earn the academic degree and now it is their turn to pay back to the society. He advised them to work hard, be focused and sacrifice for higher good of the society and the nation.
The Governor also suggested to them to work on the challenges of the society. To fight against drug abuse, oppose and thwart insurgency, stop the beguiled youth from joining unlawful acts, promote child education especially, girl child education, promote Swachhta Abhiyan, contribute towards the unity and sovereignty of the nation and preserve and promote the environment.
Addressing the students of the University, who are continuing their studies, the Governor advised them to study hard, set goal and earn knowledge. He advised the students to be mission oriented and self-disciplined and pursue knowledge.
The Governor, who is the Chief Rector of the Rajiv Gandhi University, emphasized on making the academic ambience of the University vibrant and all conducive. “The University is a shrine of knowledge, temple for study, home for learning and place for personality development. To make the campus academically conducive, there must be timely and cent percent admission,” he said and stressed that the institution must religiously implement its examination calendar. “Delay in holding of examinations is tantamount to derailing of career prospects in the work field for the students. Any delay in this regard may cost the student loss of a year of hard work, in the periodic competitive examinations and further higher studies,” he pointed.
Among those present on the occasion were, Vice Chancellor of Indira Gandhi National Open University (IGNOU), New Delhi Prof. Nageshwar Rao, Governor’s wife Neelam Misra, Vice Chancellor of RGU Prof. Saket Kushwaha and former Vice Chancellor of RGU Prof. Tamo Mibang. (PRO to Governor)