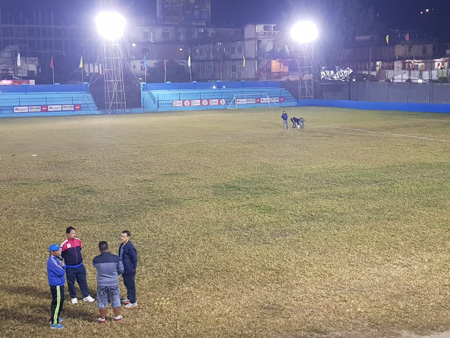 Staff Reporter
NAHARLAGUN, Dec 1: With the final round of the Sub Junior Boys’ National Football Championship all set to start here from Sunday, football fever is catching up in the Capital Complex.
Host Arunachal Pradesh, who, along with Mizoram had qualified for the championship from the North East zone, will take on Maharashtra in the opening match at 2 pm at the Rajiv Gandhi Stadium here.
“Arunachal will be playing in the championship for the first time since Arunachal Pradesh Football Association (APFA)’s inception 27 years ago”, said APFA secretary Kipa Ajay.
Arunachal Pradesh has been placed in group ‘A’ along with Tamil Nadu, Maharashtra, Odisha and Punjab. Telengana, Goa, Mizoram, Jharkhand and Haryana have been drawn in Group ‘B’.
The winners and runners up of each group will qualify for the semifinal.
The APFA has introduced e-ticketing for the convenience of the audience.
The audience can book tickets in advance by logging onto www.henkako.com. The price per ticket has been fixed at Rs 100.
The gates will open two hours before the start of the match.
Two matches will be held in a day, and the match will be played under floodlights.
Both the semifinals will be held on 13 December, and the final on 15 December.
The APFA has strictly prohibited objectionable items, including water bottles, gutkha etc inside the stadium throughout the championship.
Drinking water arrangement will be made by the organizing committee.
Deputy Chief Minister Chowna Mein and Sports Minister Dr Mohesh Chai will attend the inaugural ceremony.