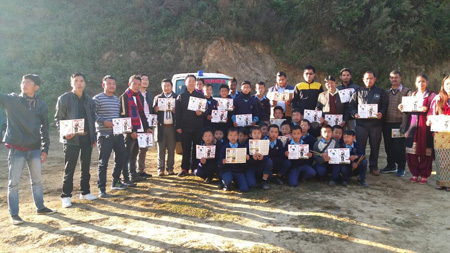 ITANAGAR, Dec 1: The World AIDS Day was observed with awareness programmes across the state on Saturday.
The Day (December 1) is dedicated to spreading awareness about the Acquired Immune Deficiency Syndrome (AIDS), which is spread by infection from a virus called the Human Immunodeficiency Virus (HIV).
The day is marked by the World Health Organisation as a global public health campaign.
At Itanagar, the Papum Pare District AIDS Control Society observed the World AIDS Day with the theme ‘know your status’ at the Heema Hospital.
A total of 141 persons, which included 38 females, took part in HIV/ AIDS screening test conducted by the society on the occasion. Condoms were also distributed free of cost.
At Namsai, the World AIDS day was observed at the District Hospital.
Speaking on the occasion, Namsai MLA Chow Zingnu Namchoom appealed to everyone to get their HIV/AIDS status tested.
Informing that three youths from interior villages were found HIV positive, he said ‘everyone should take precaution to be HIV free.’
Deputy Commissioner, Dr Tapasya Raghav appealed to one and all, especially the youth, to cooperate with the administration and other departments to eliminate this disease from the district.
She also urged the parents of drug addicts to assist the police and administration in dealing with the situation ‘which is in the increasing trend in the district.’
APSACS Project Director, Dr Riken Rina said ‘one should take precaution since this virus has no vaccine.’ He further said that one can lead a normal life even if he is infected but with a proper medication.
DMO Dr Soreya Namchoom also urged everyone to spread the message on HIV/AIDS and make the district free from the dreadful disease.
2 I/C 186 Bn CRPF, Amit Mishra also spoke on the occasion.
Later, the team, led by the MLA and DC visited the district hospital to have firsthand look and learn on the status and functionality of the hospital.
At the CHC Sunpura in Lohit district, around 400 people, including villagers, school students, PRIs members, ASHA and Anganwadi workers and medical staff participated in the HIV/AIDS awareness programme organized by the District AIDS Prevention and Control Unit, Tezu in co-ordination with the District Health Society.
DACO, DAPCU Dr UK Nath advised all the participants to spread the message of preventing HIV/AIDS. He also highlighted the mode of spread and preventive measures of HIV/AIDS while citing the status of HIV/AIDS in the district and advised the gathering to come forward for voluntary testing of HIV at ICTC, General Hospital, Tezu.
NVBDCP Officer, Dr S Towang, briefed on the National Tobacco Control Programme and also stressed on awareness among health care delivery personnel for effective and quality health care services to the people living with HIV/AIDS.
Tezu DMO Dr S Chai Pul, who is also DAPCC vice-chairman, briefed on the aims and objectives of the programme.
The RK Mossang Memorial Society also observed the day at Jairampur. A friendly football match between the New Khamdu Football Club and Government Higher Secondary School, Jairampur was organized to create awareness on HIV/AIDS on the occasion.
At Raga in Kamle district, an awareness programme was held on HIV/ AIDS, with a collaborated celebration of the Indigenous Faith Day at the Yada ground, informed DRCHO Dr Kapu Sopinc.