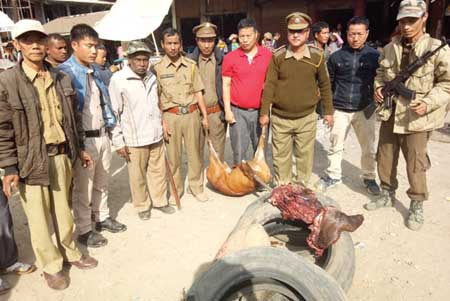 DAPORIJO, Dec 5: The carcass of a deer and meat of several other wild animals were seized during a search operation jointly carried out within the township here in Upper Subansiri district on Wednesday by a team of officials from district administration, forest and police department.
The seized wildlife carcasses were later destroyed in presence of CO-cum-Town Magistrate Dubom Apang, DFO Jumdo Geiyi and OC G Basar and legal proceedings initiated against the offenders under various sections of the Wildlife Protection Act.
Further, Deputy Commissioner Danish Ashraf informed that similar surprise checks would be held regularly in the district in order to check illegal hunting of wildlife species and strict action would be taken against those involved in such activities. (DIPRO)