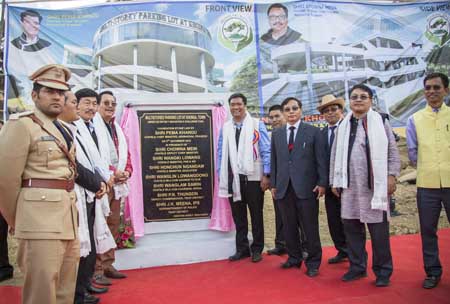 BORDURIA, Dec 5: On his second day of the ‘Arunachal Rising’ campaign, Chief Minister Pema Khandu paid homage to Ashok Chakra late Havildar Hangpan Dada in his memorial here in Tirap district on Wednesday.
On his arrival at Borduria circle, the chief minister also met late Dada’s wife Chasen Lowang and had a discussion with the army officers for development of the memorial.
He requested the Tirap deputy commissioner to submit a DPR for work on the memorial and assured Rs 2 crore as initial fund to start the work in this financial year.
The chief minister later inaugurated the office of the CO, while his deputy, Chowna Mein inaugurated the inspection bungalow.
Attending a public meeting, Pema said, ‘if people demand then the state government is willing to upgrade the Borduria circle to sub-division headquarters.’
Responding to a public memorandum, the chief minister assured to establish a circle office at Longo; construction of Tirap chief council office and construction of 21 km Joypur-Hukanjari road.
He informed that the 21 km road from Terung to Sumsi Pathar has been approved under the central scheme for Rs 20 crore.
On the establishment of a Sainik school, the chief minister promised to start one for eastern Arunachal in the next session and assured to establish it in the TCL region.
Launching the ‘Arunachal Rising’ campaign, the chief minister also gave away cash prizes and certificates to best ASHA workers, Anganwadi workers and progressive farmers from Borduria circle. He also distributed blankets to gaon burahs of the circle.
DCM Chowna Mein, Advisor to CM, Wanglin Lowangdong and state BJP president Tapir Gao also spoke.
While launching the campaign at Katang in Tirap district on Wednesday, the chief minister assured to fill the gap in human resource for the new administrative circle headquarters for Bari-Basip circle.
He said the Bari-Basip administrative headquarters was first approved by former chief minister late Dorjee Khandu, including the one for Borduria and Chubam.
Informing that the state government will be bringing several reforms in the coming years, the chief minister said, ‘in the initial period, politicians may feel uncomfortable with the reforms but will prove to be in the interest of the people and will have long-term benefit.’
CM also released the four-year of progress report of local MLA Wanglam Sawin and appreciated him for transparency and efficiency.
He gave away cash prizes and certificates to best ASHA workers, Anganwadi workers and progressive farmers from Bari-Basip circle and also distributed blankets to gaon burahs.
DCM Chowna Mein, MLA Wanglam Sawin and State BJP President also spoke there.
Earlier, the chief minister laid the foundation stone for multi-storied parking lot for Khonsa town to be constructed under the CM’s district innovation and challenge fund.
He also inaugurated the administrative circle headquarters for Bari-Basip circle, augmentation of water supply to Khonsa Township under NLCPR and laid the foundation stone for a police station at Katang.
The DCM inaugurated the office of the circle officer at Katang. (CMO)