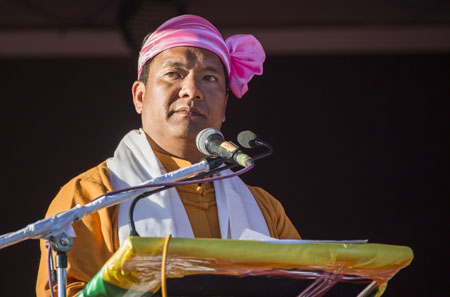 NAMSAI, Dec 8: The issue of giving PRCs to non-APST communities residing permanently in Namsai district cannot be ignored and kept pending for long as the issue has the potential to disturb the peace and harmony in the area, said Chief Minister Pema Khandu.
“It is our responsibility to solve the PRC issue once for all; or else it has the potential to disturb the peace and harmony in the area,” the chief minister, who was here on Saturday to launch the ‘Arunachal Rising’ campaign, said.
He said the interests of the indigenous tribal populations would be taken care of and cut-off dates would be set to qualify for PRC.
“The commission set up under Environment & Forests Minister Nabam Rebia to study the PRC issue has the report ready. The report has been prepared taking into account the ground realities and with inputs from indigenous tribal populations and non-APST residents,” he said.
Pema announced that PRCs would be issued to “genuine non-APST residents” by January next year.
Responding to a public memorandum, the CM assured to sanction creation of posts of Tai Khamti language teachers; to develop the Poi Pee Mai ground at Nalung; and to construct a state guest house in Namsai.
The chief minister also attended Poi Pee Mau – the New Year festival of the Tai community – here, along with Meghalaya Chief Minister Conrad Sangma.
After launching the ‘Arunachal Rising’ campaign, he handed over cash prizes and certificates to the best performing ASHAs and anganwadi workers, progressive farmers, and the winners of the essay competition conducted in the district.
Earlier, the chief minister laid the foundation stones for the science college and the ITI in Piyong, the road from the BRO road to Philobari (to be constructed under the PMGSY), and a girls’ hostel for the Namsai GHSS.
“Due to rigorous campaign under Sarkar Aapke Dwar (SAD), people are becoming more aware about various central and state flagship programmes, and are availing the benefits of the programmes,” he said.
Stating that the ‘Arunachal Rising’ campaign aims to bridge the gap between the public and the government, he lauded the local administration for reaching out to maximum beneficiaries.
“More than 150 such camps have so far been conducted, and more than 3 lakh people have benefitted from them,” Pema said, and informed that the five best performing districts in conducting SAD camps would be awarded in the coming Statehood Day celebration.
Deputy Chief Minister Chowna Mein, state BJP president Tapir Gao, and MLAs Zingnu Namchoom and CT Mein also spoke. (CMO)