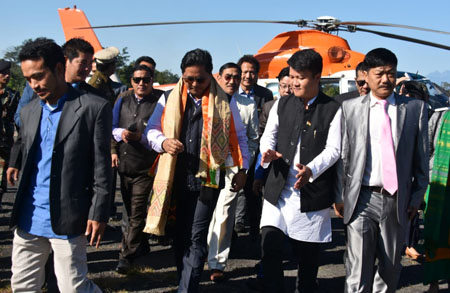 ROING, Dec 9: “The Northeast states should come together and stand united to make their voices heard at the Centre,” said Meghalaya Chief Minister Conrad K Sangma, who is also the national president of the National People’s Party (NPP), at a meeting hosted here by local MLA Mutchu Mithi and the NPP’s Lower Dibang Valley district unit on Sunday.
Dwelling on the history and formation of the NPP, Sangma said, “It is the biggest regional party in Northeast India, and is growing rapidly while striving to take NE and the whole nation forward.”
He commended the beauty and development of Roing town, and lauded Mithi for all developmental work which he said was “very well planned and neatly executed.”
MLAs Benedict R Marak and Dasakhiat Lamare from Meghalaya were also present at the meeting, as were Bordumsa MLA Nikh Kamen, Khonsa MLA Tirong Aboh and Nacho MLA Tanga Byaling.
A large number of supporters of the party, along with members of the party’s district women’s wing also attended the meeting.