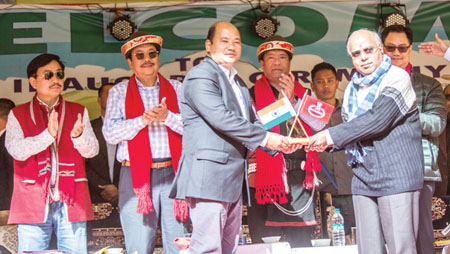 TATO, Dec 9: Chief Minister Pema Khandu inaugurated Shi Yomi district at a function here on Sunday, in the presence of MoS for Home Kiren Rijiju, DCM Chowna Mein, MLA PD Sona and state BJP president Tapir Gao.
Following the inauguration, the Mechuka ADC read out the notification for creation of Shi Yomi district, which was followed by the ceremonial flag handover to Deputy Commissioner M Dirchi and SP G Dajangju of the newly created district by Chief Secretary Satya Gopal and DGP SBK Singh, respectively.
“The district, carved out West Siang and comprising Mechuka, Pidi, Tato and Monigong circles, was a long felt demand which
subsequent state governments failed to fulfill,” said Pema.
The state assembly under the current dispensation gave its assent for the creation of the new district, owing to its large geographical area, inaccessible terrains, and the district headquarters Aalo being far from the four circles, he said.
Congratulating the people of Shi Yomi, Pema urged all the local communities – Memba, Adi and Tagin – of the new district to “think in one line and walk together to build a prosperous and developed district.”
Thanking the people for donating land for establishing government infrastructure in the district, the CM urged them to set their priorities right, saying the government could not afford lavish spending.
He said while provision for funds for infrastructure development in Shi Yomi would be kept in the coming budget session, fund for the development of crucial infrastructure required for immediate functioning of the district headquarters would be sanctioned first.
The inaugural ceremony featured a dance performance by local women and students. (CMO)