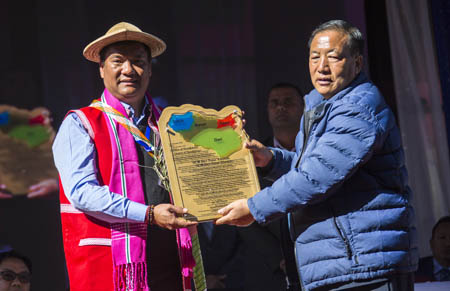 BASAR, Dec 10: Chief Minister Pema Khandu on Monday inaugurated Lepa Rada – the 24th district of Arunachal Pradesh, carved out of Lower Siang district and comprising Tirbin, Dari, Sago and Basar circles – at its headquarters here.
“The dream that was sown 10 years back has finally been fulfilled. It was on this day in 2008 that former CM late Dorjee Khandu had promised to fulfill the wishes of the citizens of Lepa Rada,” Pema said in his address.
He read out the district’s vision statement, and urged the people to stand by it. “The zeal and enthusiasm to make Lepa Rada a model district is already visible,” he said, and expressed hope that “the mission” would be fulfilled in the days to come.
Pema said fund provision for infrastructure development in the new district headquarters would be placed in the coming budget session. He meanwhile gave assurance that all initial funding required for immediate functioning of the HQ would be provided.
The CM commended local NGO Gumin Rego Kilaju for its commendable work in preservation of the natural ecosystem of Basar area, and for working for sustainable development.
“The government is working to improve connectivity in Basar and Aalo areas to exploit the huge potential they offer in horticulture and agriculture,” Pema said, adding that survey is already on for establishing railway connectivity to Aalo.
On air connectivity, the chief minister said fixed-wing aircraft are unable to land at the Aalo ALG due to technical reasons. “Therefore a new plot will be identified, wherever feasible in a nearby area, for construction of a new airport,” he said.
The chief minister unveiled the bust of late Todak Basar, and laid the foundation stone for the Karko heritage-cum-museum building. He also inaugurated the 4 km PMGSY road from Basar to Lape, executed by the rural works department.
MoS for Home Kiren Rijiju inaugurated the 15 mtr RCC slab bridge over the Sie river, while DCM Chowna Mein inaugurated the office of the highway executive engineer.
The CM later flagged off two ambulances.
Earlier, Chief Secretary Satya Gopal handed over the flag and the notification of the new district to Lepa Rada DC Duly Kamdak, and DGP SBK Singh handed over the ceremonial flag to the SP. (CMO)