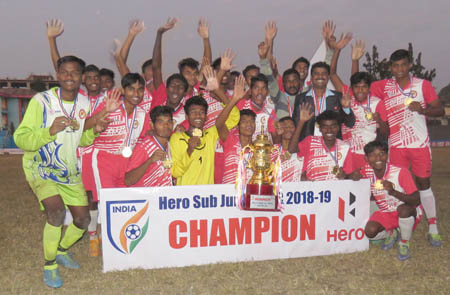 Staff reporter
NAHARLAGUN, Dec 15: Arunachal Pradesh suffered a heartbreaking defeat at the hands of Odisha in the final of the Hero Sub-Junior National Football Championship at RG Stadium here on Saturday.
The match extended to penalties after both the teams were locked 0-0 in regulation and extra time.
It took 14 penalty shots – the normal 10 and another two rounds of sudden death – for Odisha to finally pull off a hard-fought 5-4 victory over the hosts.
The host team started on an aggressive note, making inroads into the Odisha half. But luck was not favouring Arunachal. On the other hand, Odisha were seen adopting a defensive strategy, especially in the latter part, with the intent to force a penalty shootout – and they succeeded in their strategy. 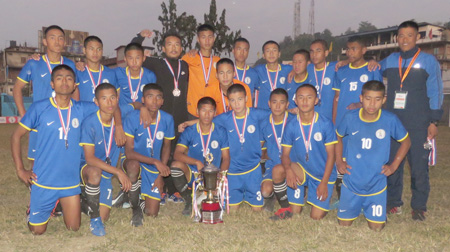 Arunachal skipper Yura Tarung was chosen as the ‘most valuable player’, while Odisha’s Biashal Oram was declared the best goalkeeper of the tournament.
Sports & Youth Affairs Minister Dr Mohesh Chai along with Arunachal Pradesh Football Association (APFA) president Takam Sanjay and Sports Authority of Arunachal (SAA) Chairman Bamang Tago gave away the prizes to the winner and the runner-up teams.
Before distributing the prizes, Dr Chai, on behalf of the state government, thanked the All India Football Federation for having given Arunachal the opportunity to host one of the major football events of the country.
He said sufficient sports infrastructure would come up in Arunachal within a year or two, and urged the AIFF to award Arunachal more such football events in the future.
APFA president Sanjoy said he was happy with the overall performance of the state team, although it lost the match.
“It is a great achievement to become second in the country, especially for a state like Arunachal, where resources are limited,” he said.
He, however, said poor finishing cost the team.
Today’s was Arunachal’s maiden major football final since the formation of the APFA 27 years ago.
The final match was also witnessed by SAA Vice Chairman Doni Nich, Sports Director Tadar Appa and AIFF AGS (competition) Anila Kamat.