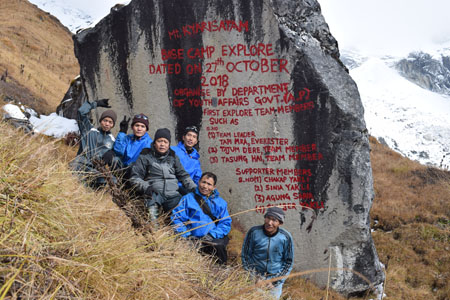 ITANAGAR, Dec 15: Remains of earthen pots, the carved feature of a human face on a rock, and sharp objects fashioned out of stones have been found in East Kameng district.
The objects were discovered by Everester Tapi Mra and his team while exploring the base of Kyarisatam, a perennially snow-clad peak sitting 7001 metres above sea level, in Sawa circle of East Kameng district recently.
Apart from these, other discoveries were made, such as bones, a hot spring, a lake reportedly larger than the size of a standard football ground, and a new mountain peak which Mra said could be higher than the peaks that have been climbed or discovered so far in the state.
The findings might shed light on many unknown facts about the state and its people.
The team camped at Takte Legne before reaching Kyarisatam’s base (at 4512 metres above sea level) where the temperature drops below -1 to -5 degrees Celsius during nighttime.
The team had started their treacherous journey from Seppa, and reached the peak’s base after 20 days, after crossing dense forests, formidable hills and five rivers, Mra said.
The team, accompanied by 15 members of the Puroik community, made night halts at Chayang Tajo, Sawa, Veo, Saria, Sari Top, Khai, PP Camp, Yali Camp, Yana, Rock Camp, Tam Camp and Takte Legne, before finally setting up camp at the base of Kyarisatam on 27 October.
“Apart from jungle clearance, we constructed temporary wooden and bamboo bridges to cross the rivers,” said Mra while narrating the difficulties faced during the exploration.
Sports & Youth Affairs Minister Dr Mohesh Chai, who flagged in the mountaineering team at the state guest house here on Saturday morning, urged the mountaineers and the department’s officials to “work in a focused manner to promote Arunachal Pradesh as one of the most sought after mountaineering destinations in the country and the world.
“The challenging virgin mountain peaks covered with ice, snow and impenetrable forests can easily attract and satisfy the taste of any hardcore explorer or mountaineer,” he said.
Dr Chai said mountaineering and allied activities could generate huge revenue for the state if they are taken up sincerely.
“This, however, would be possible when mountaineers and tourists from outside start to visit the state,” Dr Chai said, citing the example of Nepal, which earns crores of rupees annually from the Everest climbers.
Assuring all support, Dr Chai advised the department and the mountaineers to focus on one peak at a time.
He congratulated Mra and his team, which included Tajum Dere and Tasung Hai, for the achievement, and described Mra as “a pioneer of mountaineering in Arunachal Pradesh.”
Sports & Youth Affairs Secretary Dani Salu described Arunachal as “a powerhouse for mountain climbing.”
He informed that the government has provided Rs 15 lakhs for mountaineering expeditions in the previous and the current year, and assured that the government would provide more fund for development of mountain tracks.
Sports Authority of Arunachal Vice Chairman Doni Nich, Youth Affairs Director DK Dinglow, the department’s adventure cell in-charge K Romeo Meetei, and Sports Assistant Director Karbia Dodum were also present during the flagging-in ceremony.