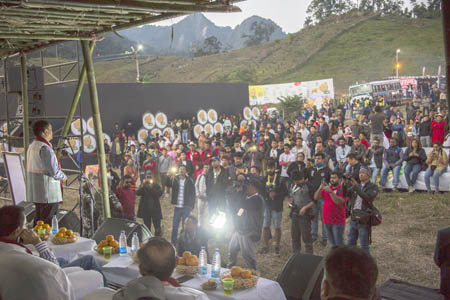 Tourism will be game changer for Arunachal: Pema

DAMBUK, Dec 15: The 5th edition of the Orange Festival of Adventure and Music (OFAM) started on a colourful note here in Lower Dibang Valley district on Saturday.
Addressing the inaugural event, Chief Minister Pema Khandu said tourism would be “a game changer for Arunachal, particularly for eastern Arunachal.”
“As connectivity progresses, the region will see competition among each other, and a place like Vijaynagar, owing it its spectacular natural beauty, will give tough competition to the rest of eastern Arunachal,” he said.
The CM said the OFAM has grown from initially meeting with skepticism to wide acceptance among the locals.
“It is growing bigger and better every year, and will benefit the local tribal communities economically,” he said.
Pema also said the state government would engage with JK Tyre to improve and develop rubber farming in the state, for the benefit of the rubber farmers.
He flagged off the ‘JK Tyre Orange 4X4 Fury’ off-roading event, and inaugurated the horticulture exhibition stall showcasing local produces such as oranges and kiwis from Lower Dibang Valley and Dibang Valley.
Local MLA Gum Tayeng also spoke. (CMO)