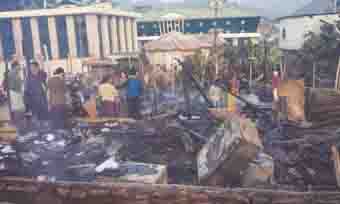 ITANAGAR, Dec 16: A major fire broke out near the civil secretariat here on Sunday morning and gutted three houses with seven rented compartments.
Three fire tenders were pressed into service immediately after the fire department received information about the fire. The blaze was brought under control after 90 minutes of efforts by the firefighters, said Itanagar Fire Station Sub-Fire Officer Nabam Dokho.
Reportedly, four LPG cylinders exploded in the fire.
While a car and a motorcycle were completely destroyed, an RCC building was also partially damaged in the fire.
An electrical short-circuit is suspected to be the cause of the fire, Dokho said.
State BJP vice president Tame Phassang visited the spot and met the affected families. He extended financial assistance to the families as immediate relief.
Phassang appealed to the chief minister and the department concerned to provide immediate compensation to the victims.
In another fire mishap, at D Sector in Naharlagun this morning, an OBT house was devastated.
Two fire tenders were rushed to the spot to douse the fire and prevent it from spreading to the nearby houses.