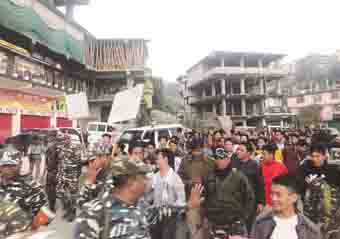 Staff Reporter
ITANAGAR, Dec 16: A banners-wielding flash mob comprising youths staged a march against Deputy Chief Minister Chowna Mein on Sunday evening to register their protest over the state government’s announcement regarding issuing permanent resident certificates (PRC) to non-APSTs living in Namsai and Changlang districts.
Mein’s reported assurance to issue PRCs to non-APSTs living in Lekang in Namsai district as a “New Year gift” has been drawing flak from several quarters.
The protesters, mostly teenagers, started marching from the IG Park gate (on the Niti Vihar side) towards the DCM’s bungalow, shouting slogans against Mein. They were, however, stopped midway by the magistrate and police personnel.
The youths accused the DCM of being an “anti-indigenous people minister.”
“DCM Chowna Mein should withdraw his statement. If he refuses to do so, he is an anti-Arunachal minister,” said a protestor.
He said the protest was a symbolic expression of the anger and frustration of every Arunachalee over the move to grant PRCs to non-APSTs.
“We are here to express our emotion over the PRC issue. We went to the district administration to seek permission for the rally but it was denied on the ground that we had to be affiliated to an organisation,” the protestor said.
He said the protestors did not belong to any organisation but volunteered to stage the rally following discussions on the social media.
The group demanded that the government and the DCM take back their statements, saying they would otherwise stage a “massive protest” on 27 December against the government and the DCM.
Addressing the youths, magistrate Likha Radh cautioned them against taking the law into their hands as they did not have permission to take out the rally.
“Your issue is genuine; you can discuss it with the DCM and the chief minister, but it should be done through the proper channel, without resorting to a protest rally,” Radh told the youths.
The protestors dispersed after about 20 minutes of confrontation with the law.