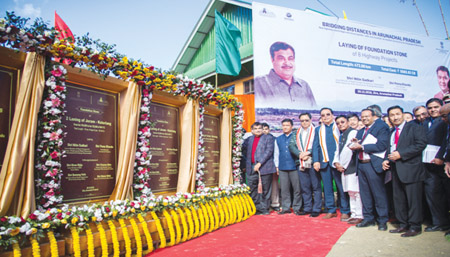 ITANAGAR, Dec 20: Union Road Transport & Highways Minister Nitin Gadkari on Thursday dedicated road and bridge projects worth Rs 9,533 crore to the people of Arunachal Pradesh in separate functions at Ziro in Lower Subansiri district and Roing in Lower Dibang Valley district.
Addressing the gathering on both the occasions, Gadkari said the Centre would leave no stone unturned to support the development of Arunachal. He said the new highways and bridges would ensure quicker, safer, all-weather connectivity for the people of the state.
“Road network in Arunachal Pradesh has increased from 1,804 kms to 2,885 kms since 2014, and a sum of Rs 28,000 crore is being spent on construction of highways in the state,” he said.
Gadkari expressed happiness over the accelerated pace of infrastructure development in Arunachal.
“The welfare of the villagers, the farmers and the public as a whole can happen in an area only when the facilities of water, power, transport and communication are available,” he said.
Addressing the people at the function in Ziro, MoS for Home Kiren Rijiju congratulated them on the launch of the Potin-Pangin highway project, and said good connectivity is a primary requisite for the development of an area.
“The long due project that was sanctioned way back in 2008 will soon see the light of day. The tendering process for the said stretch is underway, and the work is expected to start soon. However, let us learn from our mistakes and extend our wholehearted, unconditional support this time,” he said.
Chief Minister Pema Khandu asserted that the state government would deal strictly with anyone indulging in corruption related to highway compensation.
“Due to land compensation issues and exorbitant compensation rates, the Potin-Pangin highway project was unable to progress well despite the project being launched in 2008,” the chief minister said.
Regarding the Bopi-Potin road, the CM said “excess of compensation amount has been disbursed, which was disclosed after reassessment of the rates.”
Calling for a change in people’s mindset to create an environment conducive to development, Pema said “highway construction in the western part of Arunachal is moving at a slow pace, compared to the eastern areas where highway construction is taking place at a faster pace.”
He said the state government is making every effort to expedite the construction of the Potin-Pangin road, and has divided the project into nine packages.
“A new survey has been conducted for realignment that will reduce the 407 km road to 352 kms. Till the construction starts in full gear, the state government has allocated Rs 60 crore for repair and maintenance of the road,” he said.
Pema requested Gadkari to lend his support “in every capacity” for the development of Arunachal, and urged the Centre to hand-hold the state, particularly in the development of green industries, saying “the state has huge potential in agri-horti, tourism and hydropower sectors.”
At Roing, the CM said the support Arunachal has been getting from the Centre “is tremendous.”
“The inauguration and foundation stone laying for the projects is a boon for the area as it will boost connectivity and help the public immensely,” he said.
DCM Chowna Mein lauded the central government, the NHIDCL and Navyuga for their efforts in bringing the projects to fruition, and expressed hope that they would continue their efforts in the interest of the region’s people.
At Ziro, Gadkari laid the foundation for 472 kms of national highways costing Rs 5,583.92 crore. These include the 26.12 km Akajan-Likabali-Bame road (Rs 374.73 crore), and six packages on the Joram-Koloriang section of NH 713 for a total length of 94.39 kms and a cost of Rs 1,253.19 crore. He also relaunched the project for two-laning of 351.38 kms of the Potin-Pangin section of NH 229 at a cost of Rs 3,956 crore.
At Roing, Gadkari inaugurated bridges across the Dibang and Lohit rivers, and the approach road between Chowkham and Digaru. The total length of this project is 30.95 kms (at a cost of Rs 1508.30 crore).
The minister also inaugurated the recently two-laned 25.14 km Mahadevpur-Buri Dihing section of NH 52 B, constructed at a cost of Rs 136.60 crore, and the 22.23 km Bordumsa-Namchik section of NH 52 B, constructed at a cost of Rs 189.91 crore.
In addition, Gadkari laid the foundation stones for about 96.47 kms of national highway projects, costing Rs 2114.82 crore, in Roing. These include two-laning of the 74.86 km Roing-Hunli section of the Hunli-Anini road (NH 313) at a cost of Rs 1718.59 crore; two-laning of the 11.31 km Hayuliang-Hawai section of NH 113 at Rs 256.66 crore; and the 10.3 km Hunli-Anini section of NH 313 at a cost of Rs 139.37 crore.
A host of dignitaries, including state BJP president Tapir Gao and government officers were present at both the events. (CMO and other sources)