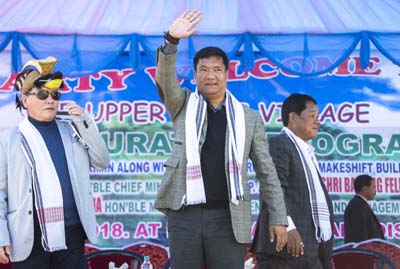 KIMIN, Dec 23: Chief Minister Pema Khandu said while the eastern parts of the state are progressing fast, the western districts have failed to keep pace.
Addressing an event here in Papum Pare district on Saturday, the CM cited the progress of the Trans-Arunachal Highway and other road projects in the eastern districts, compared to the slow progress of road projects in the western districts, and urged the people of the region to “avoid individual preferences and monitory profits but think for the common good and the progress of their respective areas.”
“Another concern in our region is the slow progress of the airport at Hollongi. It is not a proud thing that ours is the only state capital in the country without an airport after 70 years of Independence. The blame goes to our mindset. Let’s change it, not only in the context of the airport but every project that would benefit all,” Pema said.
He informed that the prime minister’s office is “specifically monitoring the Hollongi airport project.”
“With the concern at the highest level, I am happy to inform that the compensation issue has been resolved. The state government will bear 10% of the cost of land compensation, and most probably the prime minister himself will lay the foundation stone sometime in January next year,” he revealed.
The CM appealed to the people not to create hurdles again, and to allow the airport to see the light of day.
Earlier, the chief minister inaugurated the makeshift building for the Arunachal Pradesh State Council for Science & Technology’s (APSTST) Centre of Excellence for Bio-Resources and Sustainable Development. He also inaugurated the Rural Technology Demonstration Centre of the APSCST, and the steel bridge over the Panyor river at Komasaki.
“In the coming days, the new centre of excellence will benefit the entire state. The new steel bridge will connect about 12-13 villages of the area, bringing new opportunities and growth,” he said.
Since the Doimukh assembly constituency shares the longest boundary with Assam, the state government has created eight circles – the most in any constituency – to better administer the area and to maintain harmonious relations with neighbouring Assam, he said.
Responding to a public memorandum, Pema promised to upgrade Kimin subdivision to an independent ADC headquarters. He also promised to address the grievances regarding power and digital connectivity to the centre of excellence.
“Papum Pare district, being one of the most privileged to have several institutes of repute, has huge potential for growth. It is blessed with the prestigious National Institute of Technology, the government law college, a film institute, women’s college, etc,” Pema said.
He commended the administration for carrying out Sarkar Aapke Dwar camps in every corner of the district and reaching out to more 26,000 beneficiaries so far.
APSCST Chairman Bamang Mangha in his address informed that Rs 55 crore has been sanctioned for the centre for bio-resources and sustainable development and the rural technology demonstration centre.
“The two centres will help to train the local farmers in the modern techniques of agriculture. Also, they will aid to scientifically develop traditional medicinal plant gardens, which will generate self-employment opportunities for the people of the state,” he said.
The two projects had been announced by Union Science & Technology Minister Harsha Vardhan during his visit to Kimin last year.
Besides Mangha, the chief minister was accompanied by Environment & Forests Minister Nabam Rebia, RWD Minister Bamang Felix, state BJP president Tapir Gao, and others. (With CMO input)