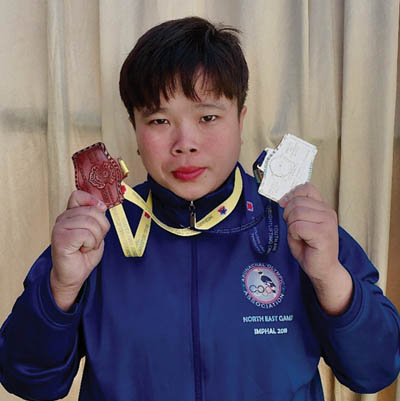 ITANAGAR, Dec 23: Christina Tayeng bagged a silver and a bronze medal for Arunachal Pradesh on the final day of the Youth and Junior National Weightlifting Championship in Maharashtra, bringing the state’s total medal tally to one gold, four silver and an equal number of bronze on Saturday.
She bagged the silver in the women’s youth 81 kg category by lifting 154 kgs in total. She lifted 68 kgs in the snatch and 86 kgs in clean & jerk.
The gold medal in this category was won by Sanathoi Devi of Manipur by lifting 2 kgs more than Tayeng in total. She lifted 69 kgs in snatch and 87 kgs in clean & jerk for a total of 156 kgs.
Participating in the junior category, Tayeng lifted the same weight (154 kgs) that she had lifted in the youth category, which fetched her and the state a bronze.
The junior and youth weightlifters of the state have been engaged in various competitions since the 8th state championship this year.
They participated in the first NE Olympic Games held in Manipur in October, the 64th National School Games in November, and finally the just concluded Youth and Junior National Weightlifting Championship in Maharashtra.
“But despite such hectic schedule the young lifters of the state have shown great consistency in their performance in all the competitions,” said Arunachal Weightlifting Association general secretary Daniel Teli.
He informed that the lifters will be leaving for Pune, Maharashtra, on 5 December, after their arrival here on 27 December, to participate in the Khelo India Youth Games scheduled from 9 to 16 January, 2019.