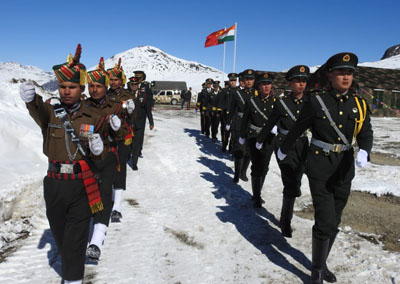 ITANAGAR, Jan 2: Indian and Chinese troops jointly celebrated the New Year’s Day on Tuesday, 15,000 feet above the sea level in snow clad mountains and sub zero temperatures of Bumla in Tawang district of Arunachal Pradesh, a defence communique said.
Both sides greeted each other warmly and reaffirmed their commitment in maintaining peace and tranquillity along the line of actual control as per the various agreements between the two nations.
The celebration was organised by Peoples Liberation Army (PLA) on the Chinese side of Bumla and led by Col Hu Tang Sheng, it said adding the Indian delegation was led by Col Prasenjit Karand.
Bumla, situated about 32 Km from Tawang, is one of the five Border Personnel Meeting (BPM) venues for Indian and Chinese troops guarding the sensitive border.
In the last 28 years, the BPM mechanism has evolved into a vital platform for resolving local issues and fostering mutual confidence with a view to enhancing peace and tranquillity in the sector, the communique added. (PTI)