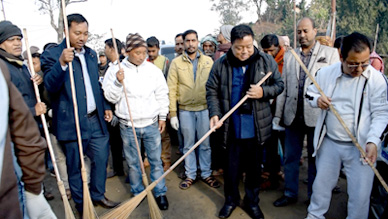 KHONSA, Jan 4: Convenor and brand ambassador of the Northeast NAMASTE States Swachh Bharat Mission (SBM) Committee, Sotai Kri, urged the people of Tirap district to construct sanitary toilets with septic tanks and soak pits, so that the town’s stream is not polluted.
“Khonsa town stream water must be preserved and promoted by abolishing open defecation,” Kri said, addressing a large gathering of traders, government officers and members of the public who participated in a cleanliness drive organised under the SBM here on Friday.
Commending Deputy Commissioner PN Thungon for initiating construction of iconic toilets in Khonsa, Kri said the initiative was the first of its kind in the Northeast.
Responding to a public memorandum, Kri assured to take up with the state and central governments the matter of early completion of NH 315A connecting Hukanjuri to Joypur and Longding.
Kri has conducted cleanliness drives under the SBM in all the northeastern states, except Mizoram, in the last four months.
Thungon dwelt on the importance of conducting mass cleanliness drives. Market welfare committee president Tingwang Hosai also spoke.
The SBM drive in Tirap district started at Deomali on Thursday, and covered Borduria and Kaimai villages before reaching Khonsa.
On Friday, the drive was conducted from the petrol pump to the bazaar taxi stand here, and in Kheti village and Lazu. (DIPRO)