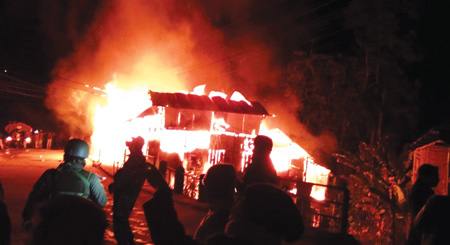 CHANGLANG, Jan 4: Eleven shops and four rented houses at PK Point in Changlang market were reduced to ashes in an inferno that broke out at 7 pm on Thursday.
The fire was so devastating that it took almost three hours for firefighters, police and Assam Rifles (AR) personnel and the locals to control it from spreading to other shops and the crafts centre hostel.
Apart from the fire tenders, water tanks from the AR and TK Enterprises were deployed to douse the flames. Two LPG cylinders burst amid the attempts to extinguish the fire, but fortunately no one was injured.
Local MLA Tesam Pongte and Changlang DC RK Sharma have provided interim relief to the affected people. (DIPRO)