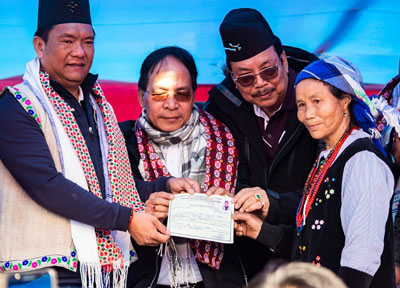 [ Tongam Rina ]
ITANAGAR, Jan 5: Two Yobin organizations have expressed disappointment at the exclusion of the Yobin tribe from The Constitution (Scheduled Tribes) Order (Amendment) Bill 2018 to be introduced in Parliament.
The bill, which was approved by the union cabinet chaired by Prime Minister Narendra Modi on 2 January, seeks revision in the list of the Scheduled Tribes (ST) of Arunachal Pradesh.
The union tribal affairs ministry and the National Commission for Scheduled Tribes (NCST) have already asked the state government to restore the ST status of the community.
“Exclusion of Yobin from the current APST Bill is a mystery and a matter of grief. It must be corrected before the bill turns into an act,” said Yobin Tribe Fundamental Rights Forum general secretary Avia Ngwazah and Yobin Welfare Society vice president Tifusa Yobin in a joint statement.
“In Arunachal Pradesh, only the Yobin tribe has suffered ST atrocities more than any other tribe, and Yobin dwells along international boundary areas. Therefore, it is expedient that the little-known tribe in the remotest Northeast India villages has a clear constitutional identity,” the statement read.
Though they were recognized as APST in 1979, the recognition was withdrawn shortly afterwards. It was restored again, but halted yet again in March 2017, thanks to a faulty notification issued in February 2015 by the state government. However, following directives from the union tribal affairs ministry and the NCST, the Arunachal government started issuing ST certificates to the Yobins in December 2018.
Member of Parliament Ninong Ering has also requested Prime Minister Narendra Modi to revise the recent cabinet decision and include the Yobin tribe in the ST list.
“It is the duty of a government to provide voice to the voiceless and to do justice with the Yobins and realize the slogan of Sabka saath, sabka vikas,” Ering wrote in a letter sent to the PM on 3 January.
The state cabinet had taken a decision to grant ST status to the Yobin tribe on 4 February, 2015. Two days later, the social justice & empowerment and tribal affairs (SJETA) department issued a notification proclaiming the tribe as an ST of the state. But the notification came under the scrutiny of the central government as it violated laid down provisions of the Indian constitution.
After the notification had been issued, the union tribal affairs ministry wrote back to the Arunachal Pradesh chief secretary in April 2015, stating that notification of the Yobin tribe as an ST was not in accordance with the provisions of Article 342 (2) of the constitution and therefore the notification may be withdrawn.
An order was issued on 25 January, 2017, by the SJETA department, wherein it said that the “state cabinet in its meeting held on 4 January, 2017, had approved for cancellation of the notification (No Secy (SW)/SC/St (IN-EX-99/Pt-II, dated 06-02-2015), regarding the ‘Yobin Tribe’ as Scheduled Tribe of Arunachal Pradesh.”
The cabinet decision led to mass denial of ST certificates to the tribe since March 2017, even though the Centre had specifically said that responsibility for issuance and verification of ST certificates rests with the state government.
The Centre directed the Arunachal government in July to include the tribe in the state’s ST list, saying the Yobin and any other tribe “inhabiting in Arunachal Pradesh is inclusive tribe and no separate amendments are required in terms of Article 342 (2) of the constitution of India.”
In a letter addressed to the state’s SJETA ministry, the Centre observed that the Yobin tribe does not figure among the 16 tribes.
“The words ‘all tribes in the state including’ are indicative that the list of STs in Arunachal Pradesh is an open-ended one, which means that all indigenous tribes in the state are included, besides those listed in 16 tribes that were enumerated as per the Constitution (Scheduled Tribes) Order, 1950 (Part XVIII),” it said.
It was only on 5 December, 2018, that the rights of the tribe, which inhabits the Da-Wo-Di valley, popularly known as Vijaynagar, were restored.