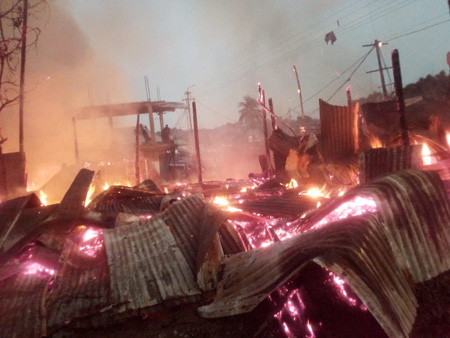 Staff Reporter
ITANAGAR, Jan 6: A 45-year-old shopkeeper, identified as Ashim Ghosh, was reportedly charred to death in a fire accident which occurred at the market in Deomali subdivision of Tirap district on Sunday morning.
Tirap Deputy Commissioner PN Thungon informed that the fire gutted six shops and partially damaged a few more.
The fire is believed to have broken out at around 3:30 am, when most of people were fast asleep. It engulfed the entire area and reduced six shops to ashes even before the fire tender reached the spot. The cause of the accident is believed to be an electrical short circuit.
On receiving the information, EACs Akan Reagon and Tana Bapu rushed to the spot, and, with the help of civilians, police personnel and the army’s artillery unit led by Capt Suresh Tripathi, helped to douse the fire.
The DC said the fire brigade “rushed to the spot at around 8:55 am” – hours after the fire had already been extinguished.
Thungon along with the DDMO later assessed the damages and distributed immediate relief of Rs 5000 each, along with utensils, blankets, clothes etc, to the affected families.
The DC advised the people, particularly the market welfare committee and NGOs, to be vigilant during the dry winter season, and asked them to install a fire extinguisher in every house.
Meanwhile, PHED Minister Wangki Lowang, who is also the local MLA, provided Rs 1 lakh each to the families as relief.
Chief Minister Pema Khandu also announced Rs 50,000 each for the affected families. The CM further announced to establish a fire station in Deomali subdivision.
On Sunday afternoon, Narottam Nagar Ramakrishna Mission secretary, Swami Achyuteshananda, handed over Rs 3000 each to the eight shop owners and Rs 5000 to the family of the deceased, on behalf of the institute.
The mission authorities also handed over blankets, clothes and food items to the affected families, and assured to provide tin sheets to help them reconstruct their shops.