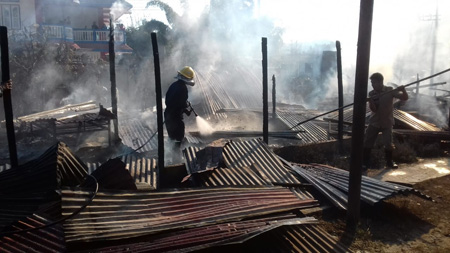 NAHARLAGUN, Jan 8: A fire mishap in Papu village near here on Monday afternoon gutted two OBT houses along with two SPT houses and an attached kitchen.
Naharlagun fire station officer Sujit Chakraborty informed that an OBT barrack in which two families were living on rent, one OBT kitchen, and two SPT apartments, including that of the house owner, Tok Simon, were gutted in the fire.
He said three fire tenders were pressed into service to contain the fire. While no casualty was reported, all the belongings were lost to the fire, which reportedly started from the kitchen area.