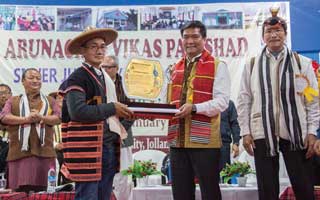 ITANAGAR, Jan 14: Chief Minister Pema Khandu appealed to the people of the state to preserve the tribal languages, and urged every tribal family of Arunachal to speak in their native language with their children and family members.
He said this while attending the silver jubilee celebration and karyakarta prant sammelan of the Arunachal Vikas Parishad (AVP) here on Monday.
Addressing the workers assembled from all over the state, the chief minister said “it is important for parents to speak in their mother tongue, so that the children are able to carry the legacy of their rich culture further to the coming generation.”
Speaking on the importance of tribal languages, Pema said the essence of a culture can be found in the language. “When a tribe loses its language, it loses its innermost being, a part of its soul or spirit,” he said.
Recalling the contributions of the AVP in the development of Arunachal in the fields of education, health and cultural preservation, the CM expressed his admiration and respect for the AVP workers, and promised his government’s assistance to the AVP in rendering services for the welfare of the people of Arunachal.
Earlier, the chief minister felicitated workers of the AVP for their contributions in the development of the state. He also released a souvenir of the silver jubilee celebration, and a Nyishi calendar published by the Nyishi Indigenous Faith Group. (CMO)