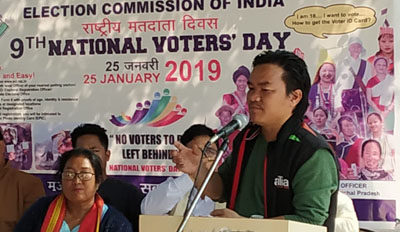 YUPIA, Jan 25: The 9th National Voters’ Day (NVD) was celebrated in a befitting manner throughout the state on 25 January.
Chief Secretary Satya Gopal and Chief Electoral Officer (CEO) Kaling Tayeng attended the celebration here in Papum Pare district.
The CS highlighted the importance of the day, and informed that this year 35286 voters aged 18 and 19 years have been added to the voters’ lists, with an overall increase of 2.75% in the state.
Gopal commended the CEO for doing a “tremendously great job by organizing chunav schools at all polling stations, voters’ awareness forums, and EVM and VVPAT awareness campaigns.”
He informed that a toll-free voter helpline number – 1950 – has been soft-launched, and that a voters’ verification and information programme has also been launched “to help the country to have free, neutral and peaceful parliamentary and assembly elections.”
Gopal urged all eligible voters to exercise their right to vote “in the most free and fair manner,” and to adopt “righteous electoral practices.”
The CS distributed EPICs to new voters, and felicitated the best booth level officers (BLO).
Tayeng also urged the young voters to exercise their voting rights in a free and fair manner “and choose leaders with good vision and ideologies to maintain the true meaning of democracy.”
Papum Pare DC Dr Joram Beda, SP Tumme Amo, DCEO Liken Koyu, HoDs, students, and others attended the programme.
In Upper Subansiri district, HoDs, government staffers, students and others participated in the NVD celebration in Daporijo, where DC Danish Ashraf spoke on the objectives of the day, and officials of the district election office presented demonstrations on EVM and VVPAT.
The DC urged the participants to encourage maximum enrollment of voters for the forthcoming elections, and distributed EPICs to newly-enrolled 18-year-old voters, besides administering the NVD pledge.
Prizes and certificates were distributed to the winners of the essay and debate competitions which had earlier been held in schools.
In West Siang HQ Aalo, DC Swetika Sachan and AERO Binti Mibang spoke on the day’s significance and urged young voters to take part in the democratic process ethically and without fear. Earlier, students from various schools took out a procession to promote voting.
In Tawang, ADC Bekir Nyorak called for conducting the forthcoming elections “with sincerity and dedication, following the laid down rules,” and EAC (Election) Lobsang Tsetan spoke on this year’s NVD theme, ‘No voter to be left behind’.
The ADC gave way EPICs to the new voters, and distributed prizes to the winners of quiz and essay competitions.
The participants, including HoDs, new voters, BLOs and administrative officials, were also administered the NVD pledge.
In East Kameng HQ Seppa, a street show was staged, which also featured the launching of a helpline number (1950), distribution EPICs to newly enrolled electors, administering the NVD pledge, and awarding of prizes to the best performing BLOs and the winners of literary competitions.
Deputy DEO Dahey Sangno launched the helpline and the toll-free numbers to enable registration of all e-roll related grievances.
DTO Jini Natung spoke on the objectives of the NVD celebration. The day was also celebrated at all the administrative outposts of the district.
In Namsai, DC Tapasya Raghav encouraged new and young voters to exercise their right to vote and “fulfill their duty towards the nation,” while ADC B Talukdar spoke on the aims and objective of the NVD.
The DC gave away prizes and certificates to the winners of essay and quiz competitions.
In Lohit HQ Tezu, the district election office organised a programme at IGG College to mark the day.
DC Karma Leki exhorted the participants to exercise their right of adult franchise “wisely and consciously, without succumbing to pressure or inducement.”
He informed about the establishment of the district contact centre, and urged the people to avail the facility by dialling the toll-free number, 1950, with queries or for redress of grievances related to elections.
AERO Pime Keche presented a demonstration on the use of EVM and VVPAT.
In Siang district, NVD was celebrated in Boleng by DC Rajeev Takuk, HoDs, teachers, students, BLOs and members of the public.
The DC urged everyone to be responsible and exercise their voting rights wisely. He also administered the NVD pledge to the participants.
A demonstration on EVM and VVPAT machines was presented, the winners of the essay competition were awarded, and the best performing BLOs felicitated.
The day was also celebrated in Rumgong, Riga, Kaying and Rebo-Pergying.
NVD was also celebrated at the SDO office in Kimin, where new voters were given EPIC cards. Kimin GHSS Principal Nyami Riba spoke on fair voting and the importance of franchise.
The event, led by SDO Likha Tejji, saw a big attendance of young voters, gaon burahs, government employees and others. (With inputs from DIPROs)