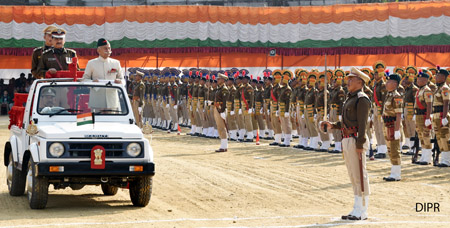 ITANAGAR, Jan 27: Governor BD Mishra called upon the people of the state to “shed thoughts of individual benefits and work for the development of the state.”
Unfurling the National tricolour on the 70th Republic Day at IG Park here on Saturday, the governor urged the people to cooperate with the state government in its agenda for all-round development.
“I appeal to the people to think and act in the larger interest of the state, discarding individual benefits, and allow the developmental projects
to take off without raising any objections,” the governor said.
Mishra was referring to the objections raised by a section of the people over the greenfield airport project in Hollongi, the foundation of which will be laid by Prime Minister Narendra Modi next month.
He said the union finance ministry has cleared the proposal for the airport at an estimated cost of Rs 1,043 crore.
“We must remember that projects like Hollongi airport are not only for Hollongi but the entire state. We must understand that it was after sustained persuasion by Chief Minister Pema Khandu and his council of ministers to make the Centre agree to provide – despite there being no such provision – land compensation as a special case for the state,” he said.
Referring to the improving law and order situation in the state, the governor commended various tribal bodies and civil society organisations that have provided support and assistance to the law enforcement machinery of the state.
“I congratulate the entire government machinery for its concerted and effective steps to put an end to the menace of the bandh culture in the state capital,” Mishra said.
He said the state government is focused on improving education, health, tourism, skill development, agriculture and horticulture, and harnessing the rich hydropower potential in the state.
The governor also highlighted the initiative of the state government to strengthen the police force.
Later, Chief Secretary Satya Gopal announced the names of the state awardees, comprising 39 gold medallists, 27 silver medallists, and 17 commendation certificate awardees.
Tableaus by various departments highlighting the major programmes and schemes of departments like agriculture, APEDA, PHE, IPR, education, and environment & forests, besides the Apex Bank, the Itanagar Municipal Council, the Child Welfare Committee ICC and Childline, etc, were presented.
A skit on Swachh Bharat Mission was presented by the students of RGU.
A colourful cultural programme displaying the cultural diversity of the state was also presented on the occasion.
Republic Day was also celebrated in other parts of the state with great enthusiasm, highlighting the various achievements and development initiatives of the state government.
The tricolour was raised at the state secretariat here by Chief Secretary Satya Gopal, in Aalo Aalo (West Siang) it was hoisted by Deputy Commissioner Swetika Sachan, in Basar (Leparada) by DC Duly Kamduk, in Boleng (Siang) by DC Rajeev Takuk, in Bomdila (West Kameng) by DC Sonal Swaroop, in Changlang by DC RK Sharma, in Daporijo (Upper Subansiri) by DC Danish Ashraf, in Pasighat (East Siang) by DC Tamiyo Tatak, in Palin (Kra Daadi) by DC S Miji, in Longding by MLA Thangwang Wangham, in Roing (Lower Dibang Valley) by DC Mitali Namchoom, in Seppa (East Kameng) by DC (in-charge) DJ Borah, in Tawng by DC Sang Phuntsok, in Tezu (Lohit) by DC Karma Leki, in Khonsa (Tirap) by DC PN Thungon, in Yingkiong (Upper Siang) by DC Tamik Talom, in Yupia by DC Dr Joram Beda, and in Ziro (Lower Subansiri) by DC Chukhu Takar.
In Borduria in Tirap district, MLA Wanglin Lowangdong, DC Thungon, SP JK Meena, 16 Assam Rifles CO Robin Kumar and Chasen Dada, wife of martyr Hangpan Dada, paid homage at the memorial of martyr Dada at with full military honour. The ceremony was arranged by the 16 Assam Rifles.
Reports of R-Day celebration have also been received from Deomali, Dadam, Lazu, Bari-Basip, Borduria, Balijan, and Namtok.
The 12th battalion of the National Disaster Response Force at Doimukh, the office of the additional resident commissioner at Mohanbari (Assam), KV-II, Itanagar, and the government middle school in Jollang also celebrated R-Day.
The units of the Indian Army’s East Tawang brigade celebrated the day at Lhou Gonpa, Jangda, and Damteng (Tsachu) villages in Tawang district.
The Arunachal Pradesh Congress Seva Dal celebrated Republic Day at the Indira Gandhi Congress Bhavan, Naharlagun. The national flag was unfurled by state Seva Dal chief Kipa Kaha. (Raj Bhavan and DIPROs)