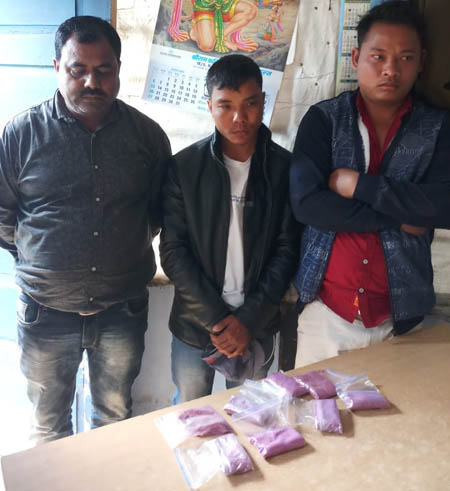 Staff Reporter
DIRAK, Feb 6: Three persons were arrested by the Mahadevpur unit police for possession of contraband drugs in their vehicle at the Dirak gate here in Namsai district on Wednesday.
The three have been identified as Krishna Shah (vehicle owner) from Doom Dooma, and Sumitra Chakma and Budista Chakma from Diyun.
Speaking to reporters, OC Mahadevpur/ Lekang Lod Tari informed that his office received a tip-off about some persons carrying suspected contraband drugs in a white Santro car.
“We immediately alerted the police team at the Dirak check gate, and they intercepted the car on arrival,” the OC informed.
The vehicle was thoroughly searched when the OC arrived at the check gate and eight sachets of pink-coloured powder (suspected adulterated brown sugar)were found from underneath the floor mats of the car.
“We informed EAC W Mosang, and recovered the suspected brown sugar under his supervision. The car has also been taken in police custody and the three people have been arrested,” the OC informed.
On inquiry it was found that the drugs had been brought from Tinsukia and were being taken to Namsai and Diyun areas.
Deputy Superintendent of Police Sepraj Perme informed that police sources were engaged to keep track of suspected people involved in drug peddling.
“These suspects were under the radar of the police and they were caught red-handed today,” he said.
A case has been registered under section 21 (c) of the Narcotic Drugs and Psychotropic Substances Act at the Mahadevpur police station.
The police team in the recovery also included head constables DK Singh, JP Tiwari, AK Singh, and cadets CM Mein and P Tikhak.