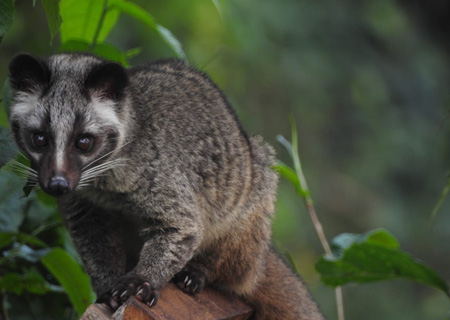 [ Kime Rambia ]
This is the story of an abandoned and homeless Himalayan or masked palm civet baby.
During the broadening of the highway stretch near Elephant Flat – a small village about 15 kilometres away from Bhalukpong in West Kameng district – along with many other trees, a khokon tree (Duabanga grandiflora) was also cut down by the workers, only to realize later that a civet baby was living in a cavity of the tree. The home of the young civet had been cut down, and its mother apparently abandoned her nest and the baby when the tree fell.
On 7 June, 2017, Vijay Lipyang, the then gram chairperson of the village, along with a few of his friends handed over the young male civet to us. He looked only 2-3 weeks old, yet healthy, but very hungry. As soon as I held him on my hand he started searching for milk. I called up a few veterinarians working with the Wildlife Trust of India, and on their advice started feeding him Lactogen Stage-1. This was the start of our long journey, with me raising the baby civet with the aim of making him fit enough to be released in the wild later.
As we had no provision of a rescue centre, two of our staff took on the responsibility of raising him. Hage Tamang, the driver of our range and a very passionate wildlife lover, has been serving at the Pakke Tiger Reserve (PTR) for more than a decade and has experienced many wildlife rescues along with Kepu Riba, wireless operator and our guide to the Nature Interpretation Centre.
The Himalyan civet or the masked palm civet is a nocturnal and solitary animal that is terrestrial but can easily climb trees, and maintains and protects their territorial range. We conducted further research on the food and habits of the civet, after which the entire process of hand-raising the baby was smooth and unexpectedly easy.
We began with Lactogen as milk substitute, and progressed smoothly to feeding fruits, insects, and then small mammals to the civet. As he was growing up we sometimes left live insects and small rodents for him to hone his predatory skills. He was made to climb nearby trees when not kept in his enclosure away from people. He had a very strong will to survive, and had extraordinary health. Through more than eight months he was not sick even once – always alert and active. Our only worry was to keep his wild traits intact, so that it would be easy for him to survive in his natural home later.
Though we always knew he was to be released someday, we were concerned about his chances of survival, and Kepu got too attached with Momo, the name she gave him. A golden line of advice from a very good friend of mine made it easy for me to decide: “Release him. Even if he doesn’t survive, at least let him die as a free spirit in the wild. Yeh kya zindagi hai?” she said, pointing towards the enclosure.
So, on 15 February, 2018, after eight months and seven days, we released Momo in the PTR. As teary-eyed Kepu and Tamang said their last goodbyes, I wished for Momo to establish his territory with lots of females falling for him, so that we get to see plenty of his next generation. My words brought a smile on the otherwise sad faces of my staff.
Today it’s exactly one year since his release, and we see a fit and healthy Momo, who occasionally comes around to our camp. He is his own witness of a successful release in the wild. (The contributor is Range Forest Officer, Tippi Wildlife Range, PTR)