ITANAGAR, Feb 26: Much to the relief of the people, the capital complex was calm on Tuesday for the second day.
Some shops and a few petrol pumps were open in Itanagar and Naharlagun after several days of shutdown, and people could be seen rushing to buy supplies.
Our correspondent reports: In Upper Subansiri district, the All Upper Subansiri District Students’ Union (AUSDSU) took out a peace rally in Daporijo against granting of PRCs to non-APSTs, and to pay homage to the three youths who lost their lives in police firing during the anti-PRC agitation in Itanagar.
The candlelight march, which started from the GHSS, passed through the township, and culminated at Singhik Hall. 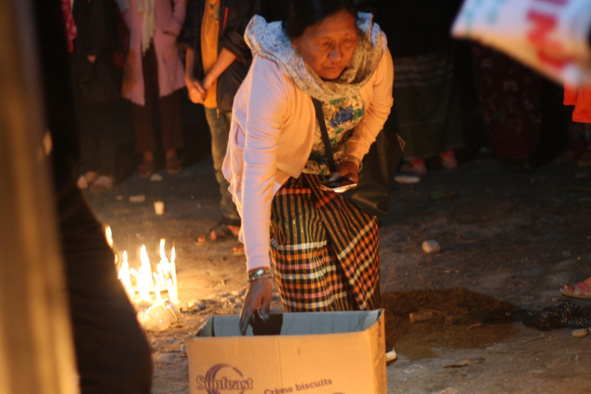 The march was joined by students from various schools and colleges, and members of the Gandhi Market Bazaar Committee, the Abotani Clan Organization, and the public.
Later, addressing the gathering, AUSDSU president Yade Natam appealed to the government to respect the sentiments of the public and never raise the PRC issue again in future.
She also informed the gathering that the state government would not raise the PRC issue again, as was informed by the district administration during a meeting held at the DC office here on Tuesday.
Natam, however, said the union would stage a democratic movement if the government fails to keep its promise.
In Changlang district, The Tangsa Students’ Union (TSU) along with several welfare organisations organized a peaceful candlelight march and fundraising in Miao on Monday to express support to the families of the three youths who lost their lives in police firing during the anti-PRC agitation in Itanagar.
“Three of our bravehearts have laid their lives for us and for our future generations. It is because of their supreme sacrifice that the Arunachal government has decided never to table the PRC bill in the state assembly again, respecting the sentiments of the people,” said TSU president Sengman Ronrang.
“We must stand together and support the families of our brave men who sacrificed their today for our tomorrow,” he said, and appealed to the welfare organisations to contribute generously.
Nearly 500 people took part in the peaceful rally, which also saw the participation of members of the Arunachal Pradesh Women’s Welfare Society, the Yobin Welfare Society, the Yobin Youth Association, the Galo Welfare Society, the Tagin Students’ Union, the Singpho Women Organization, the Muklom Elite Society and the Singpho Development Society, besides government officers, public leaders, and church representatives.
“We are not against anyone. We are a very peace-loving community. Impulsive decisions without reference to the true sentiments of the people of the state, and the untimely death of the three young lives all could have been easily avoided. We have come here to condole the death of our brave boys and to express our solidarity with the bereaved families,” said a women leader from the district, Pinna Kitnal Muklam.
A collection box was set up at the concluding point of the rally, and everyone chipped in with their contributions.