While on her daily workout, which included running, boxer Dr Minu Tadang would often see a group of boisterous young boys in the Rajiv Gandhi University (RGU) campus in Rono Hills.
One day in August 2015, she heard the young boys scream at one another, using obscene words, which made her stop on her tracks.
“I did not think much as I intervened and asked them if they would be interested in boxing,” she says.
They were quiet for some time, and then they started laughing, saying, “Larki hoke boxing sikhaega (a girl will teach us boxing)?”
Minu did not have to wait long because the boys eventually agreed to accept her as their coach. Girls joined too. Now they are a club with a membership of 20, with the youngest one being a six-year-old girl.

The journey
Daughter of Tadang Takia and late Tadang Yajit, Minu (34) says that when she was in her teens she used to spend all her free time outdoors, swimming in the Senki river or playing football in the nearby football field – almost always the only female in the group.
“I had a lot of energy and my mother had no idea what to do with me, so she let me play,” she says.
One day an uncle of hers told her about an advertisement by the sports academy in Chimpu, inviting applications for admission from sportspersons.
“We looked for the newspaper but none of the neighbours had a copy. I soon forgot about it, but as luck would have it, I picked up a copy of a rain-soaked newspaper lying on the road in Papu Nallah, and I came across the advertisement,” she says.
So Minu went to the academy the next day, along with her friends, and she was accepted.
Within a few months of admission in Class 10, Minu had her first competitive bout in 2001, representing Arunachal Pradesh at the North East Sports Festival, where she won a bronze medal. That medal was the first of many to come.
In 2003, she won a gold medal in the East Zone Open All India Boxing Championship, and she went on to participate in national games.
Minu particularly remembers the Senior Women National Boxing Championship held in Kerala in 2004. It was the last bout. Her opponent? Mary Kom!

A new beginning outside the ring 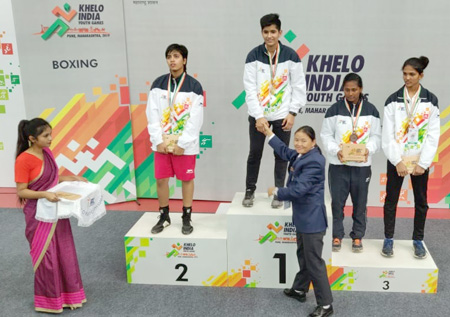 In the meantime, Minu she did her BA in Hindi from Dera Natung Government college, and graduated in Hindi in 2006.
She was not yet done with boxing, so she went to the SAI’s NIS-Eastern Centre in Kolkata for a diploma in coaching in boxing.
While she was there, she came to know about Guru Nanak Dev University in Amritsar, Punjab.
“I did not tell anyone at home because there was financial problem. So I went with a friend from Punjab to get admission in BPEd,” she says.
She got in, and went on to do her masters, as well.
While at college, she realized that there was a full scholarship for water sports on offer; so
she concentrated on kayaking, canoeing and yachting – sports which were completely new to her.
“I had to sustain myself, so I was desperate to learn. I did not miss one opportunity to train,” Minu says.
In less than a year after she picked up water sports, she represented her university at the All India Varsity Games, winning two silver medals in yachting and a bronze each in kayaking and canoeing.
She recollects the dedication of her dean, her teachers and her friends, and all the support she received from them. She says the dedication of those individuals inspires her even today.
Minu concentrated on her studies too, scoring well above 70 percent in bachelors and masters. “It was my gateway to the future,” she says.
After her masters, she got a job in the Guwahati centre of the Lakshmi Bai Institute of Physical Education (LBIPE) as physical instructor. During her five-year stay there, she qualified the NET.
When RGU opened the BPEd course, Minu applied for a job there at the insistence of her boss at the LBIPE, Guwahati.
She had all the necessary credentials, so it was not difficult to get the job as an assistant professor.
“I think I am the only teacher in RGU who got a job by doing push-ups,” she laughs, recollecting the rigorous interview.
With a doctorate from Vishva Bharati Shantiniketan, West Bengal, Minu’s academic and sporting achievements are testimony to her hard work and dedication. But that’s not all. She is a polyglot who speaks Hindi, English, Assamese, Nagamese, Bengali and Punjabi, apart from her mother tongue, Nyishi.
Today Minu is part of the national boxing association as an official.
As a technical boxing official, she has officiated in several boxing championships, both at national and international levels, since 2015. She is also the chairperson of the Boxing Federation of India’s Women Commission since 2017. She was also the team manager of the Indian youth women team during the Vojbodina Cup Boxing Championship which was held in Subotica, Serbia, in July 2018.

Way forward for Arunachal sports
“Arunachal is good in combat sports but the emphasis is being put on sports where even the Indian teams are not doing well,” she says.
She says the sports administration needs a vision with emphasis on infrastructure, coaching, and sports where the tribal people have natural talents.
She cites the example of the weightlifters. “They are doing well because they are being trained well in various academies outside the state.”
There is no dearth of talents in the state. All they need are facilities with good coaches, and support from the state, Minu says, adding that the scenario seems to be looking up with the government starting to pay attention to the facilities, even though there is yet a lot to be done.
Minu says events are not being held annually, which she says is a reflection of unprofessionalism.
“If there are annual events, it will inspire the sportspersons to focus. Right now, that is not the case,” she says.
Minu, who is the secretary-general of the Arunachal Amateur Boxing Association since 2015, cites the example of boxing.
Though the boxing association was formed in 1997, the state level boxing championship is only in its third year.
That, too, has run into hurdles, as the association is not able to organize it due to lack of funds.
Recently, Minu’s association managed to organize the club championship in RGU.
“I approached the RGU authorities to give me an area for the boxers to practice, since we were practicing in the RGU Teachers’ Association’s compound, which did not have enough space for boxing rings. We had to tie the punching bags to trees,” she says
The RGU administration gave her an area where she put together boxing rings just before the club championship. “The facility is not for RGU alone; it is for the entire state,” she says.
Minu says dedication is lacking among the sportspersons due to lack of motivators. However, she is confident that by 2020, Arunachal will have boxing players winning medals, representing the state as well as India.
There is enough talent. All they need are motivators and facilities. With Minu at the helm of affairs, that dream is sure to be realized.
“Our now sub-junior team will be a medal-winning team. Please meet them in 2020 for an interview,” a confident Minu told me as we shared a meal at her quarters in Rono Hills.