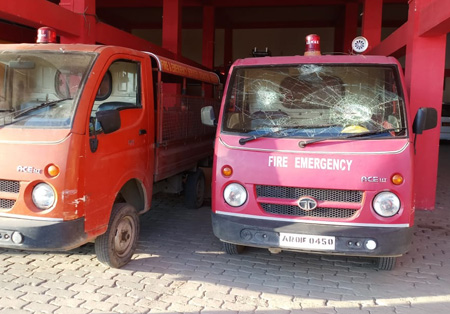 Staff Reporter
ITANAGAR, Mar 2: The capital complex police department was at the receiving end of the protestors’ ire after the anti-PRC agitation broke out in the capital and lasted for a week.
On 24 February, an angry mob stormed the Itanagar police station and destroyed everything in its way. Seventeen vehicles parked at the police station were destroyed.
“They threw stones and broke all the windows of the police station, broke a television and every electric switch in the building, besides furniture. They did not even spare the bathroom sinks,” informed the officer in charge of the PS.
The nearby women police station and fire station also faced the wrath of the protestors.
“Our office computers, chairs, and three office vehicles were damaged, and the windshield of another vehicle was shattered during the clashes with the protestors. We are yet to ascertain the total amount of losses incurred in the incident,” the officer in charge of the women PS informed.
The newly-constructed women police station nearby, which was soon to be inaugurated, was also attacked but did not suffer much damage as it was locked. However, the angry mob resorted to stone pelting and shattered all the window panes of the building.
At the nearby newly-constructed fire station, one quick response vehicle and an advanced fire tender with broken windshields are parked in the parking lot.
Most of the fire tenders were heavily damaged during the attack on the police stations near Bank Tinali.
A senior police officer said it may now be difficult to send out the fire tenders in case a fire is reported in the capital.
The fire service station has three fire tenders, of which one was damaged, and another has been sent for repair after it suffered heavy damage in the police-protestor clashes.
The newly-constructed fire service station was also soon to be inaugurated.