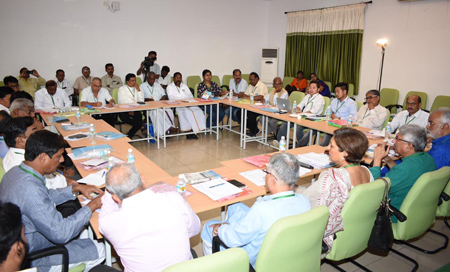 AMARAVATI, Mar 4: The Indian Journalists’ Union (IJU) has strongly condemned the manhandling of media persons and vandalizing of press vehicles by unruly protestors and security personnel during the recent unrest that broke out in Arunachal Pradesh’ twin capital towns, Itanagar and Naharlagun, over the permanent resident certificate (PRC) issue.
During the course of its two-day National Executive Committee (NEC) meeting held at KL University here in Andhra Pradesh, IJU executive members on Sunday urged the state authority to ensure safety and security of the media persons in Arunachal Pradesh.
Earlier, a two-point resolution on media atrocities was placed by the Arunachal Pradesh Union of Working Journalists (APUWJ) on the second day of the NEC meeting, which had begun on 2 March.
Several media persons were subjected to manhandling, heckling and damage of media equipment and vehicles by both unruly protesters and security personnel while covering the recent violence that erupted in protests against the proposal of grant PRCs to non-APSTs by the Arunachal government.
The unruly mob burnt down the scooter of a media person, damaged the vehicle of another, and snatched away the scooter of a third.
“Fortunately, none of the journalists sustained grievous injuries, except for one, who was injured when unruly protesters threw a bottle at her in the midst of the chaos,” said APUWJ President Amar Sangno while proposing the resolution in the NEC meeting.
Several media persons were subjected to police harassment, as well. It was reported that cameras and mobile phones of several media persons were snatched away and damaged by security personnel. They also deleted all the footages of the violence that had been captured by the journalists during the protests.
The IJU and the APUWJ also mourned the three youths who lost their lives in police firing during the anti-PRC agitation. In a condolence message, the IJU and the APUWJ expressed solidarity with the bereaved family.
The IJU’s state units of Madhya Pradesh, Assam, Telengana, Tamil Nadu, Kerala, Uttar Pradesh, Chattisgarh, Punjab and Arunachal Pradesh attended the NEC meeting. The two-day meeting was hosted by the Andhra Pradesh Union of Working Journalists.
Each state unit presented their report cards. Sangno in his report highlighted the APUWJ’s activities in the past few months, and informed that the Arunachal Press Club (APC) and the APUWJ have acquired a 1300-square-metre plot from the Arunachal Pradesh Industrial Financial Development Corporation, through the information & public relations department, for establishing the new APC with an estimated amount of Rs 1.74 crore.
He said the Arunachal Pradesh government allocated Rs 5 crore for the construction of the press club building.
“However, finding a suitable plot for the press club building was an onerous task. Now the remaining amount of Rs 3.25 crore will be used in the APC building construction and land development, which will include a parking lot and a protection wall,” Sangno said.
He also informed about the guidelines framed by the APC and the APUWJ for covering election-related news in the state. This received appreciation from IJU General Secretary Sabina Inderjit, who chaired the two-day NEC meeting.
She urged the other state units to take a cue from the Arunachal unit when it comes to covering election-related news sensibly.
The other resolutions adopted during the NEC meeting included the demand for uniformity of the pension amount for journalists across the states.
IJU Advisor S Sreenivas demanded that there should be uniformity in the pension amount, saying the pension amount of Rs 15,000 should be adopted by all state governments.
Sreenivas also said the pension scheme should be extended to all the eligible working journalists, and the eligibility criteria of 58 years, as mentioned in the IJU’s constitution, to avail the pension scheme should be followed.
The IJU advisor also urged the state units not to confine their union activities to labour rights only but to give equal importance to welfare measures. He urged the state units to conduct workshops, seminars, etc, to develop the profession of journalism.
The IJU also condemned the recent terror strike in Pulwama in Jammu & Kashmir, in which 40 CRPF jawans were killed.
Later, IJU President Amar Devullapali and GS Sabina Inderjit led the IJU NEC team in addressing media persons at the Vijaywada Press Club, and highlighted the resolutions taken during the meeting.