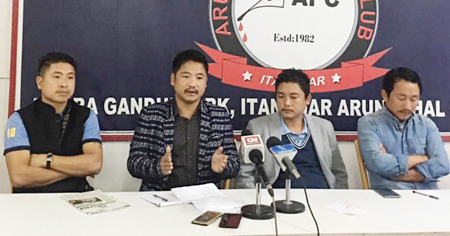 Staff Reporter
ITANAGAR, Mar 4: Claiming police highhandedness behind the All Papum Pare District Students’ Union (APPDSU) and All Tagin Students’ Union’s (ATSU) withdrawing their recent call for capital bandh, APPDSU president Nabam Tado alleged that he and ATSU president Rajju Ging Maling were coerced into withdrawing the bandh call at gunpoint by police officers.
Tado said this during a joint press conference with the presidents of the Arunachal Law Students’ Union (ALSU), the Nyishi Ethnic Students’ Association (NESA) and the ATSU at the Arunachal Press Club here on Monday. The organisations had called the press conference to clarify the reason behind the two unions’ withdrawing the bandh call of 21 and 22 February.
Tado alleged that Capital SP M Harsh Vardhan and Naharlagun police station SI Sushant Jha committed atrocities on them and later made them sign a declaration withdrawing the proposed bandh call at gunpoint.
Tado claimed that he and Maling were arrested from Hollongi area on 21 February, at around 9.45 pm, by SI Jha. He said they were taken to the Police Training Centre in Banderdewa via Assam, then to the Naharlagun police station, and then to the Itanagar police station, and were subjected to torture.
Tado also alleged that it was the SP who posted the declaration of withdrawal of the bandh call from his social media accounts, and also forced them to call their other executive members to withdraw the bandh call.
Tado demanded immediate termination of the police officers, and investigation of the incident.
The APPDSU president said the actions of the SP and the SI had caused public outcry which resulted in the death of three youths, adding that the state government should have made a clear statement on the PRC issue before the assembly session to avert the situation.
However, the SP termed the unions’ allegations “baseless,” and said they were making the allegations “to save their own faces, as they cannot justify their actions.”
Vardhan also claimed that Tado and others had called him personally several times saying they wanted to withdraw their bandh call to avoid getting arrested.
Regarding the cases registered against them, the SP said the cases have not been withdrawn “as they are responsible for the losses of lives and properties, and they should be made accountable.”
Meanwhile, extending their condolences to the bereaved families, ALSU president Yurum Tamin said the organisations were not responsible for the incidents that followed the bandh call.
Tamin said everyone was aware that no one should have come out during the bandh call “but it was because of the pro-PRC attitude of the legislators and the misunderstandings created by the police that the public came out on the streets on their own to fight for the rights of the indigenous people.”
On the demand of the grieving families, Tamin said the organisations cannot produce the person who fatally shot the three youths as they are not government agents. However, he said the organisations are asking the government to set up an inquiry committee to look into the matter.
Tamin added that the organisations are ready to cooperate with the victims’ families in fighting for justice.