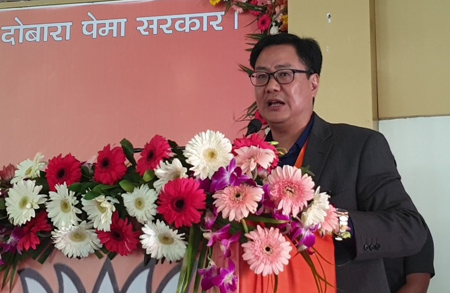 Staff Reporter
JULLANG, Mar 5: MoS for Home and MP from western Arunachal parliamentary constituency, Kiren Rijiju, on Tuesday broke his silence on the permanent resident certificate (PRC) issue, saying he “did not have detailed knowledge of the issue,” or that it would cause such chaos in Itanagar.
Attending a BJP meeting here on Tuesday, Rijiju said he had earlier spoken to the chief minister regarding the issue and was told that a joint high power commission had been set up, including all political parties, student organisations and civil society bodies, to have consultations and submit a collective report to be discussed in the assembly.
“When I asked whether something could go wrong, I was assured that there should not be any problem as all the stakeholders were giving their opinions together,” Rijiju said, adding that he has, “in principle, always been against the Chakma-Hajong refugee and PRC issues.”
Defending his stance, Rijiju said, “I have not been to Lekang. I haven’t attended meetings. I haven’t read the report. How can I pass a comment? I am taking care of the country in Delhi and doing the work of Arunachal. I don’t interfere in the small things here as it is the work of the local MLAs, panchayats and administration.”
He also called out on the Congress and said it was necessary to “understand the game plan of the opposition.”
“The state Congress went to the Centre and said the Centre sent armed forces. You instigate people, mislead innocent people, and then go to Delhi seeking peace,” Rijiju said, adding that magistrates can issue directions to requisition forces, and that the chief minister’s permission isn’t required.
“In Lekang they say PRC should be given, and here they say PRC should not be given. You cannot fool people now,” he said, and called on BJP workers to disseminate the right information to the people.
Parliamentary Affairs Minister Bamang Felix also let out a scathing attack on the opposition. While he refrained from taking names, he said that a single opposition member entered the speaker’s well on 22 February, raising only the issue of the alleged scam in the PMGSY and seeking a CBI probe into it.
“During the adjournment, he went out and claimed in public that he raised his voice against the PRC issue, and inflamed the situation,” Felix said.
Saying that the PRC issue was hijacked even after widespread announcement had been made that the issue had been buried and would never be taken up, Felix termed the continued protests “premeditated, preconceived and preplanned.”
“We are saddened that three people had to lose their lives. We are all with the families of the victims. But there are some forces outside the family that are trying to create an issue,” he added.
Felix also said: “Not a hair of the assets of some people with the highest property along the national highway was touched. It was pick-and-choose destruction. If this isn’t politics then what is it? If politics means taking lives or property, I request all political parties, including the BJP, to not indulge in such politics. If you want to fight us then fight us with your vision for the welfare of the people of the state. Make a vision. Do not incite people.”
He also read out the gazette notification issued by the chief secretary that the PRC issue is closed, and said if the issue is raised again it would be seen as a “political game.”