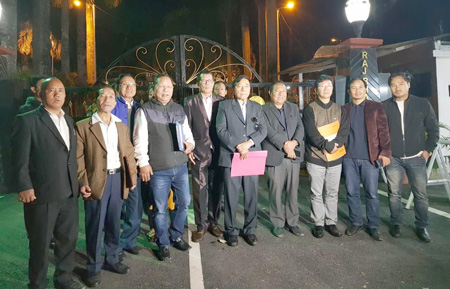 Staff Reporter
ITANAGAR, Mar 6: Opposition parties in the state met Governor BD Mishra here at the Raj Bhawan on Wednesday evening and sought the resignation of Chief Minister Pema Khandu by 8 March or “face a movement by the parties outside the Raj Bhawan.”
The party representatives included Congress Legislature Party leader Takam Pario, Janata Dal (Secular) national general secretary Gegong Apang, National Peoples’ Party (NPP) legislature leader Tanga Byaling and People’s Party of Arunachal (PPA) president Kahfa Bengia.
Seeking Khandu’s resignation for “his failure to control the law and order situation in the state,” the parties said, “in case Khandu fails to resign, the governor’s office should sack him.”
Speaking to reporters immediately after meeting with the governor, Arunachal Pradesh Congress Committee (APCC) president Takam Sanjoy said, “The response of the governor is positive. He has been informed about what happened and has assured that he will consider all the facts and take a decision as per rules.”
“If Khandu does not resign morally, we have insisted the governor to sack him and remove him immediately. If that fails, we will start our dharna on 9 March in the capital in front of the governor’s house,” Sanjoy said.
The Congress chief also informed that the party met with the Ministry of Home on 25 February and sought the resignation of MoS Home Kiren Rijiju for sending armed forces to the state. They also sought that Rijiju be sacked if he does not resign.
“Pema Khandu, Chowna Mein and Kiren Rijiju cannot escape from their responsibilities. Even Home Minister Kumar Waii would not have escaped had he not issued a statement that the shootings took place without his knowledge,” Sanjoy added.
On the Congress’ previous comment that the Raj Bhawan was the BJP’s headquarter, Sanjoy said he believed that the governor is neutral and their demands would be considered.
Former chief minister Apang said that the tension created in the capital was the creation of the chief minister and it was necessary for him to resign to defuse the tension.
“We had never created such an ugly scene during my time. The land of peace was engulfed in turmoil. Immature leaders have created this situation,” he said, adding, “We have asked the governor to exercise his constitutional authority.”
Questioning the shootings that took place during the recent anti-PRC agitation in the capital, Apang said that the parties have also sought suspension or termination of the officers responsible, within 8 March.
Noting that the elections were approaching, PPA president Bengia said, “it was necessary for the present government to step down to restore peace in the state, or the coming election would also not be peaceful.”
On whether the move was a political stunt, NPP leader Byaling denied it and said he had spoken to Khandu on 24 evening over the phone and suggested that he step down.
“The elections are coming. The victim families have not accepted the compensation and they have given an ultimatum. How will he carry such a heavy load and contest the elections? If he steps down, the public will be at peace,” Byaling said.
The opposition parties also sought that the three youths that died during the agitation, be declared as martyrs, and be given state honours posthumously.
They also sought judicial probe and constituting a ‘commission of enquiry’ on the shootings, deaths and several other injuries, preferably headed by a sitting high court judge or a retired chief justice of the high court.