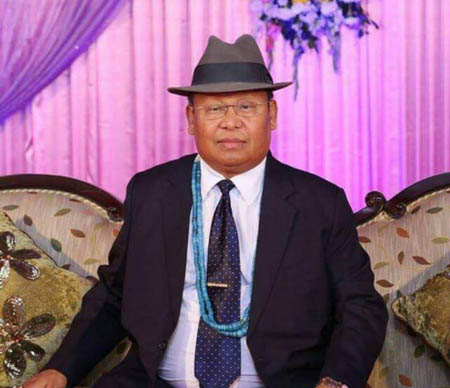 ITANAGAR, Mar 9: Science and Technology (ST) secretary Gaken Ete passed away on Saturday at a Guwahati-based hospital, after a brief illness.
He was 58.
Born to Binga and Marsen Lollen Ete on January 23, 1961, in Darka village, Ete did his primary schooling from
RK Mission School, Aalo and RK Mission School, Narendrapur.
He did his Bachelor in Agriculture Engineering from Punjab Agriculture University, Ludhiana in 1984.
Ete joined government service as an assistant engineer in the Rural Works Department in 1984 and was promoted as executive engineer in 1989.
He was promoted as superintendent engineer in 1995 in the Water Resource Department, after the bifurcation of the department. He was promoted as WRD chief engineer in 2000.
At the time of his demise, Ete was holding the post of Science and Technology, and IT secretary.
His mortal remains were brought to his private residence near RWD Colony here from Guwahati, for people to pay their last respects.
Meanwhile, the Tutem Ao Welfare Society (TAWS) has expressed shock and grief over the sudden and untimely demise of Ete.
Terming his demise as a great loss to the society, TAWS president Liya Ete said Ete was instrumental in the formation and unification of all the members of the Tutem clan.
Offering condolences to the bereaved family and also praying for the eternal peace of the departed soul, the TAWS said, ‘his passing away is an irreparable loss to the society.’
The Arunachal Pradesh Engineering Service Association (APESA) expressed profound grief and sorrow over untimely demise of Ete.
“He was very sincere and dedicated engineer. His untimely demise is great loss to the engineering fraternity of Arunachal Pradesh,”said APESA in a condolence message.