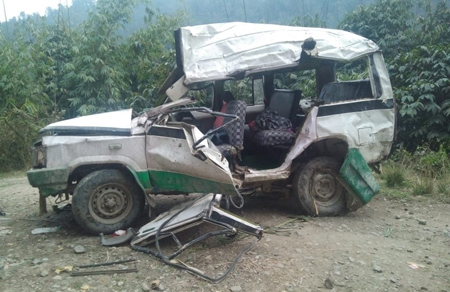 Staff Reporter
BOMDILA, Mar 13: In a tragic road accident near Kimi in West Kameng district, two passengers have died and 8 sustained injuries of which few are reportedly grievous in nature.
One male passenger identified as Sonam Tshering died on the spot while a female passenger identified as Pema Yangzom died on the way to Bhalukpong. Her two children miraculously survived but received serious injuries.
As per information there were 10 passengers on board including the driver.
West Kameng Superintendent of Police Raja Bantia informed that the Tata Sumo bearing registration No. AS 12 C 8235 was ferrying passengers from Seppa to Tezpur. “While negotiating sharp turn, it lost control and fell down the hill,” said SP.
The injured people were first taken to Bhalukpong PHC and later were evacuated to Tezpur in Assam. A case has been registered at Thrizino Police station and investigation has been launched, the SP said.