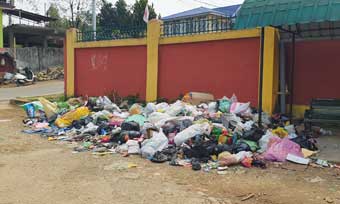 ITANAGAR, Mar 24: The residents of Itanagar and Naharlagun have urged the Itanagar Municipal Council (IMC) and the capital complex administration to take care of the sanitation and public utility services even if they are busy with the election process.

Mounds of garbage have been piling up in several colonies and sectors, and the residents have even complained that the IMC’s garbage trucks are not collecting garbage on a daily basis.
“Even though the IMC has been dissolved and the administrative power is being directly executed by the capital complex DC, they should give utmost importance to maintaining cleanliness in the state capital,” said a resident of Itanagar.