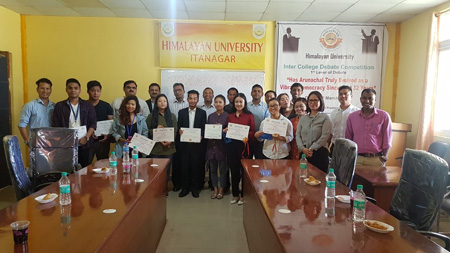 ITANAGAR, Mar 28: A debate competition on the theme ‘Has Arunachal truly evolved as a vibrant democracy since last 32 years?’ was conducted at Himalayan University (HU) here on Thursday.
Such competitions are being organised by the capital complex administration at various colleges of the capital in order to generate awareness about free and fair elections.
Twenty-one students participated in the competition at HU. Diana Mum Tamuk and Millo Munya emerged the winners, and Omen Pangam and Likha Raja were the runners-up.
The winners will now compete with the winners of other colleges in the inter-college debate competition scheduled to be held at Dera Natung Government College on 3 April.
Deputy Commissioner Himanshu Gupta expressed hope that such competitions would provide a platform to the students to express their views and also generate awareness among students. (DIPRO)