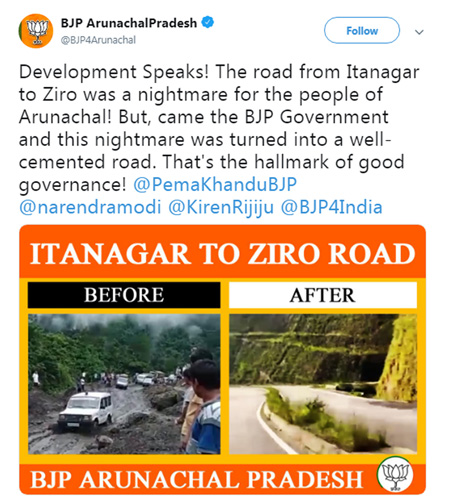 ITANAGAR, Mar 29: In a blatant instance of misleading the people, the state BJP’s social media team on Friday shared an old picture of the Itanagar-Hollongi road on Twitter, claiming that it was the Itanagar-Ziro road.
Highlighting the developmental activities of the BJP government, the party’s Twitter handle shared a ‘before and after’ picture, claiming that it was the Itanagar-Ziro road.
The ‘before’ picture correctly showed the still pathetic condition of the Itanagar-Ziro road; but the ‘after’ picture misleadingly showed the Itanagar-Hollongi road as being the Itanagar-Ziro road.
The BJP described the so-called Itanagar-Ziro road as now having been “well-cemented” by the state government, adding that it was “the hallmark of good governance.”
When some citizens pointed out the misleading nature of the picture, the BJP supporters on Twitter started abusing them.
“Hold on… Itanagar-Ziro? Really?? Which route are you referring to? Surely not the Doimukh-Potin-Yachuli-Joram-Ziro one right?? If it is so, I can’t believe what you guys are trying to prove… The existing road is a nightmare… don’t lie blatantly. @PemaKhanduBJP please take note,” one citizen retorted.
The current condition of the Itanagar-Ziro road is pathetic. The Papu-Yupia-Potin road, which is part of the stretch in question, was constructed under the Trans Arunachal Highway (TAH) project.
This stretch of the TAH was inaugurated by Union Road, Transport & Highways Minister Nitin Gadkari in January 2017, in the presence of MoS for Home Kiren Rijiju and Chief Minister Pema Khandu.
Since then the condition of road has only deteriorated. For the last two years, no repair work has been carried out on the Papu-Yupia-Potin road. The poor condition of this road poses a serious threat to the motorists.
After several citizens pointed out the misleading tweet, an embarrassed BJP removed it late in the evening, but not before screenshots of the tweet had gone viral.