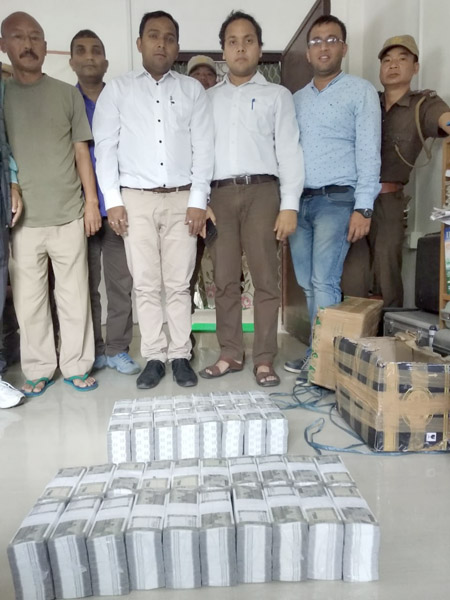 Staff Reporter
PASIGHAT, Apr 3: The Siang guesthouse here in East Siang district witnessed drama at around 11:30 pm on Tuesday after Rs 1.80 crore was discovered in a vehicle belonging to a private owner and the state transport department.
Though officials are tightlipped about who the official car was assigned to by the transport department, a source said the vehicle from which Rs 1 crore was recovered was being used by either Chief Minister Pema Khandu or Deputy CM Chowna Mein.
As a convoy carrying Khandu, Mein and state BJP president Tapir Gao entered the guesthouse premises, word spread that a huge amount of cash had been brought in their official vehicles.
The matter got out of hand for the BJP leadership when a person was seen unloading a carton, prompting Congress workers, who were already outside the premises, to gherao the guesthouse. The Congress leaders later alerted the expenditure observer and other officials.
The CM and the other VVIPs had converged in Pasighat to attend Prime Minister Narendra Modi’s election rally. They had returned after campaigning in Dambuk and Roing.
The money was recovered from two boxes.
Some of the eyewitnesses alleged that another three boxes, which remain untraceable, were reportedly taken away by staffers who were with the VVIP carcade.
Meanwhile, Additional Chief Electoral Officer (ACEO) Kangki Darang said the amount of Rs 1.80 crore was seized by a flying squad at around 9.30 pm on Tuesday from two vehicles, bearing registration numbers AR-09B-3797 (Mahindra Scorpio) and AR-0IK-0009 (Toyota Fortuner) at the Siang guesthouse.
Darang said that, according to reports received by the East Siang deputy commissioner, the son of Mebo BJP candidate Dr Dangi Perme, Christopher Perme, and former MLA Ralom Borang have claimed that the seized amount of Rs 1 crore and Rs 80 lakhs was theirs, respectively.
The Mahindra Scorpio is reportedly registered in the name of Christopher, while the Toyota Fortuner is registered in the name of the transport deputy secretary.
Christopher claimed that part of the amount (Rs 1 crore) had been earned by selling traditional beads to two persons sometime in the month of January for construction of two structures, while part of it had been borrowed from relatives and was to be invested in some contract work.
He also claimed that he had “sneaked away” the amount as there were “lots of commotion and threat from an unknown mob.”
Borang claimed that part of the seized amount (Rs 80 lakhs) belonged to him and part of it had been borrowed from his relatives.
“The money was kept with me to buy a piece of land in Mariyang, Upper Siang district, payment for which was planned to be finalized on 7 April,” Borang said.
The ACEO informed that the cash, and the case, have been transferred to the income tax (I-T) department and the department will carry out its standard operating procedure.
On whether the vehicles were part of the chief minister’s convoy for the BJP rally in Pasighat, the ACEO said he could not confirm that as the I-T department has taken over the case.
Stating that the seizure showed the success of the commission and all the officials involved, Darang said: “The election commission wants to provide an equal playing ground for all candidates.”
However, Khandu later said he learnt of the incident in Pasighat on Wednesday morning, adding, “I have called the party president to look into the matter, and we will have a clear picture in the coming days.”
Gao also clarified that the vehicle from which the cash was recovered was not part of the chief minister’s convoy, and that the video going viral on the social media wrongly projected that the cash had been brought in the CM’s convoy.
While he accepted that the cash was found in Dr Perme’s vehicle, he said the seized cash had nothing to do with the BJP, and that it was Dr Perme’s personal money.
Gao said there was a wrong perception, “created by the opposition party,” among the public on social networking platforms that the vehicle from which the cash was recovered belonged to the chief minister or the state BJP president.
He reiterated that the seized cash should not be attached to the BJP in any way because the party had nothing to do with it.

Meanwhile, the Congress party has alleged that the cash seized during the raid belonged to Khandu and Gao.
Addressing a press briefing at the party’s headquarters in New Delhi on Wednesday morning, AICC communications in-charge Randeep Singh Surjewala alleged that Rs 1 crore had been recovered from Gao’s vehicle and Rs 80 lakhs from the CM’s car. He also alleged that three more boxes containing huge sums of cash were untraceable.
Terming it a cash-for-votes scam, the party asked the poll panel to register a case against the prime minister, the chief minister and the deputy CM.
Surjewala showed two videos, purportedly showing the cash being recovered in the presence of officials of the Election Commission (EC), the local administration and the police.
The party did not vouch for the authenticity of the videos, saying the videos were available on the social media. It also claimed that the raid had been conducted after Youth Congress workers complained to the authorities in Pasighat.
“The Congress party demands that a case be registered against the prime minister, the chief minister and the deputy chief minister,” Surjewala said.
He alleged that the BJP was trying to hush up the matter, and sought to know whether the prime minister knew about the stacks of cash that were being “transferred.”