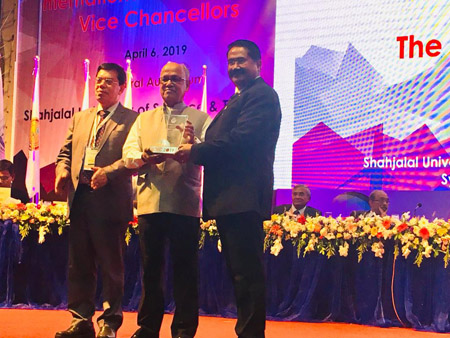 RONO HILLS, Apr 10: Rajiv Gandhi University (RGU) Vice Chancellor Prof Saket Kushwaha attended the first International Convention of Vice Chancellors, which was held in Sylhet, in Bangladesh, recently.
Organised by the Shahjalal University of Science & Technology, the convention was also attended by Bangladesh Education Minister Dipu Moni and Bangladesh UGC Chairman Prof A Mannan.
Twenty-eight VCs from the two nations, including 15 from India, attended the convention, the main purpose of which was to share the scope of collaboration in teaching, research and innovation between the two countries.
Various issues of bilateral interests of the institutions of higher education in the two nations were discussed, including internships, faculty and student exchange programmes, enrollment of foreign students, ease of issuing visas for higher education, and collaborations in research.
There was concurrence on collaborations between RGU’s Centre for Biodiversity and Arunachal Institute of Tribal Studies and universities in Bangladesh, and RGU would sign the relevant MoU with the partner institutions.
Prof Kushwaha said the convention would have far-reaching implications for higher education, both in India’s NE region and Bangladesh.
“What is needed is for us to take forward the deliberations at the convention, primarily with a focus on the 5Cs – communication, consensus, collaboration, connectivity and respect for common goals,” he said.